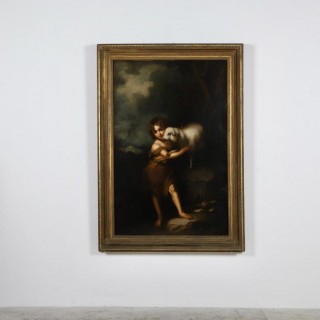 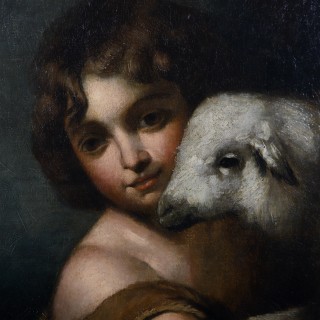 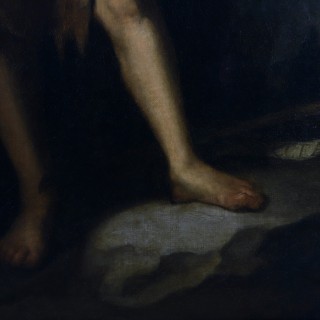 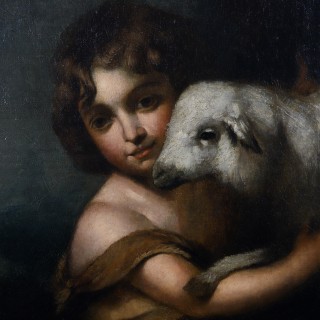 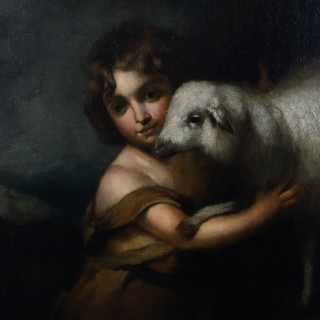 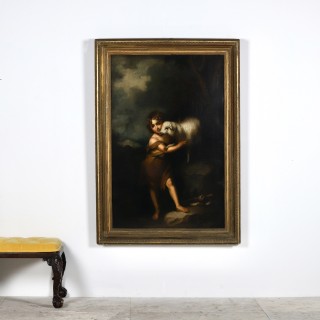 Saint John in the Wilderness

A 19th century oil on canvas of the infant saint john with the lamb, after Bartolomé Esteban Murillo

Saint John is shown embracing a lamb, a symbol of Christ’s sacrifice. The interaction between the two has a very human quality: the saint’s forearm is affectionately entwined with one of the animal’s dainty legs. He points towards heaven, referring to his encounter with Christ as told in the Gospel, when Saint John declared: ‘Behold, the Lamb of God’ (John 1: 29). These words are inscribed in Latin on a ribbon wound around a reed cross, one of John’s attributes.

Murillo’s The Young Christ as the Good Shepherd (private collection), with which it remained until 1840. There, a boy Christ holds a shepherd’s crook and is surrounded by a small flock of sheep, his hand resting gently on one of them.

By transforming adult biblical characters into children, Murillo appealed to viewers, encouraging them to emulate a child-like state of innocence and purity. This was something for which Murillo was particularly admired, and his paintings of children inspired eighteenth-century British painters Thomas Gainsborough and Sir Joshua Reynolds.

The work we see here was made for Don Justino de Neve, a canon of Seville Cathedral and one of Murillo’s most devoted patrons (the artist also painted his portrait).

Saint John in the Wilderness