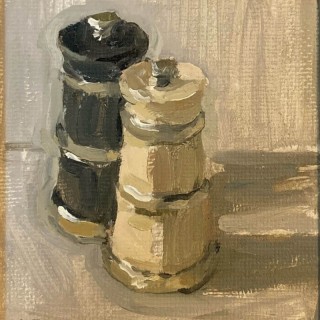 Lotta is normally based between London and Italy, though has recently moved to Jerusalem for a year. Having been educated at St Paul’s Girls’ School and the University of Edinburgh, she qualified as a barrister and pursued a career in international development for 14 years and lived for many years in Sierra Leone and Pakistan. Lotta was drawn to painting at a young age, taking courses at the Slade and École Nationale Supérieure des Beaux-Arts in Paris early on. However, the exigencies of a legal career did not allow her to pursue it, and she came to painting full-time only in 2018.

Since painting full-time, Lotta has exhibited in a wide range of public exhibitions, including many at the Mall Galleries (NEAC, SWA, RSMA, ROI, and ING), as well as the Royal West of England Academy and the London Art Biennale. She is a member of Chelsea Arts Club and prints of her work can be found at John Lewis. She won first prize in the British Art Prize, 2021, supported by Panter & Hall, Artist and Illustrators Magazine, and Viking Cruises.