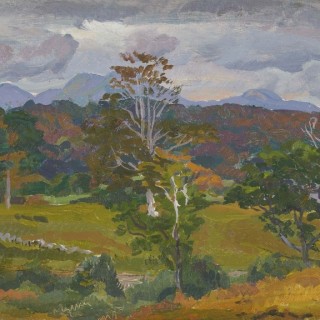 Original oil painting on board from the estate of modern Brittish artist Stephen Bone.

Born in London, the son of the artist Sir Muirhead Bone he studied at the Slade School of Art from 1922 to 1924 under Henry Tonks, and in 1925 won a gold medal for wood engraving in the International Exhibition in Paris. From 1936 to 1939 he served on the committee of the Artists’ International Association, helping artist refugees from Germany to live and work in Britain. During the Second World War he served as a civilian camouflage officer and later as an Official War Artist attached to the Navy. He was art critic to the Manchester Guardian from 1948, and in the 1950s emerged as a broadcaster, frequently serving on the panel of the BBC radio programmes ‘The Critics’ and ‘The Brains Trust’, and on the long-running and television programme ‘Animal, Vegetable and Mineral’. He was also the author of the Shell Guide to the West Coast of Scotland. In 1957 he was briefly Director of Hornsey College of Art before his untimely death in London a year later.