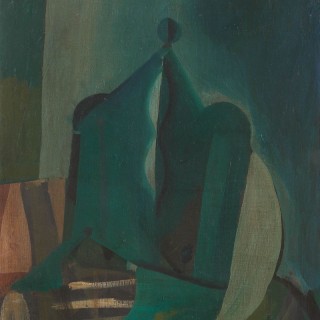 Denver was born in Hertford, Hertfordshire in 1976. He studied Art & Design at Ware College and St Albans. Graduating in the late 1990s he established himself as a serious mural painter and trompe l’oeil artist, painting mainly classical motifs and themed interiors for nightclubs and bars in and around London.

By the age of 21 Denver was working directly with Bacardi Martini painting Post war drinks advertising murals, some of which still remain in place today. Tiring of the unsociable hours that the painting of bars and clubs demanded and along with the birth of his first daughter, he swapped his paintbrush for a technical pen to eventually become a leading designer and inventor of engaging ‘point of sale’ concepts for global drinks and retail brands.

Throughout this time Denver never really stopped painting – he would paint as often as he could in his spare time and painted works for commission for family and friends. Then in 2018 he decided to paint professionally, launching himself with a series of successful solo and group exhibitions. His work is now widely collected in the UK and internationally.

“My art is my life both literally and physically, I’m no longer sure where the paint ends and life begins or vice versa. I am for the most part a figurative painter with a particular penchant for painting the unknown. I paint figures that embody no particular persona, but are comprised of bits, pieces, line and colour . The amalgamated resulting figure is both familiar, strange, and often enigmatic.”