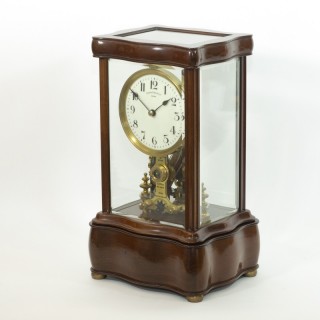 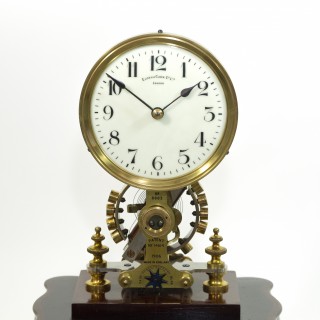 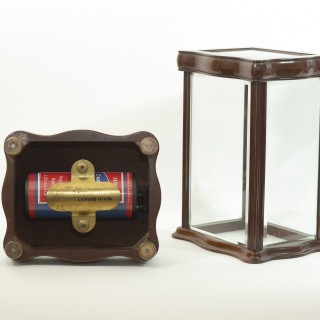 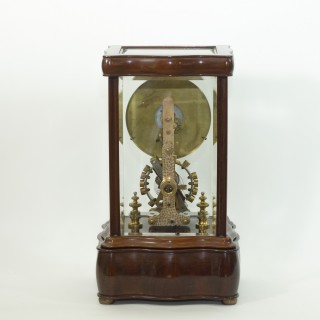 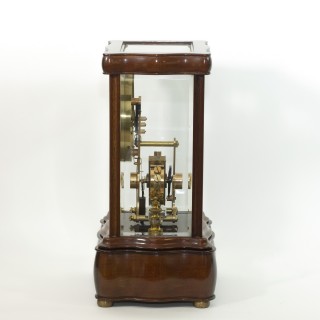 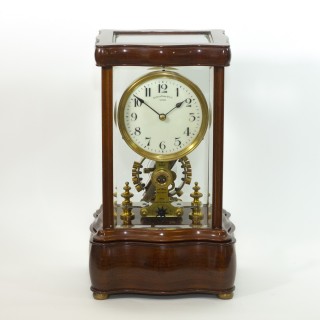 The mahogany serpentine case has a lift-off five-glass cover. This interesting clock may be an interesting diversion for anyone looking for an antique four-glass clock that requires no winding.

The electromagnetic movement has a large bimetallic balance with timing weights around its circumference. To the centre of the balance is a ball bearing pivot over a regulation adjustment scale which is inscribed No. 8883, PATENT, No. 14614, 1906 MADE IN ENGLAND.

The 4¼ inch perfect convex enamel dial has Arabic numerals and steel moon hands. It is signed EUREKA CLOCK Co. LTD., LONDON to the centre. The dial sits within a cast brass bezel.

The battery compartment is secreted in the base, the brass bracket signed with repairers’ marks over the years.

Although working well, the movement is to be overhauled and guaranteed for 3 years.

The Eureka mantel timepiece was invented by Timothy Bernard Powers of New York shortly after 1900 and Patented in 1906.

The Eureka Clock Company in London, England made these clocks between 1908 and 1914, and it is thought that around 10,000 were made by them before their demise in 1914. The design of the balance is such that a constant voltage (of c.1.5 volts) is required to ensure consistency in the amplitude of oscillation. Unfortunately early 20th century battery technology struggled to deliver a suitably stable output hence such timepieces acquired a reputation for poor timekeeping. Nowadays, good timekeeping can be achieved through the use of regulated cells which provide a much more consistent voltage output.