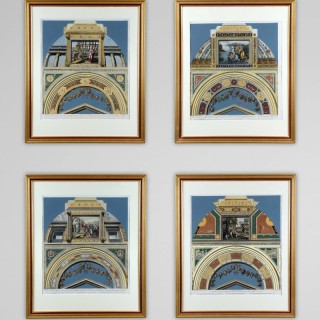 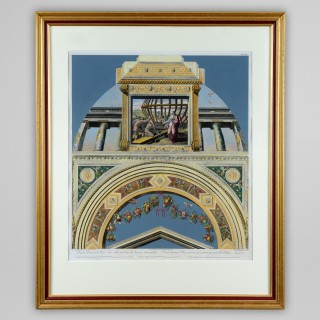 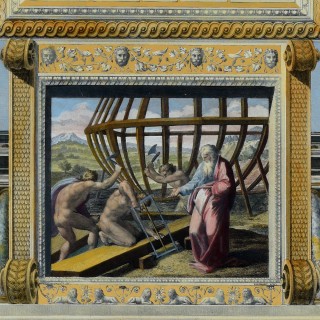 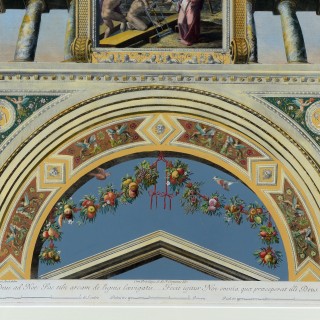 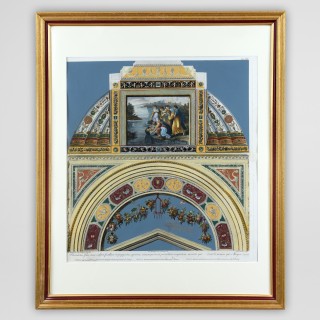 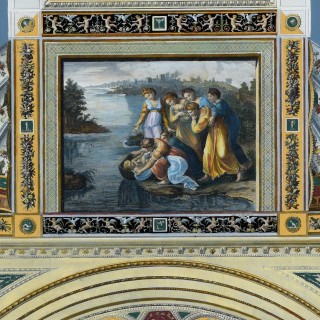 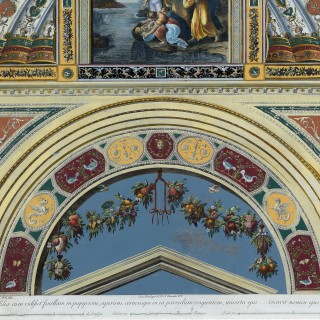 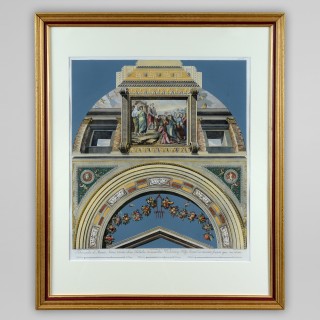 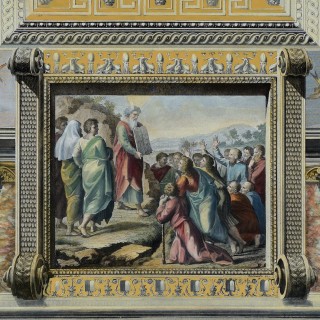 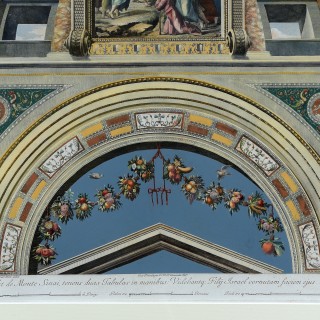 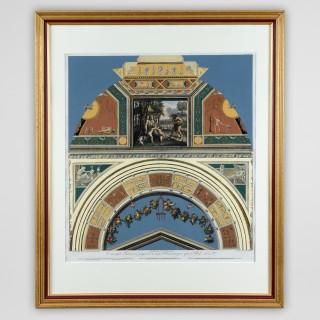 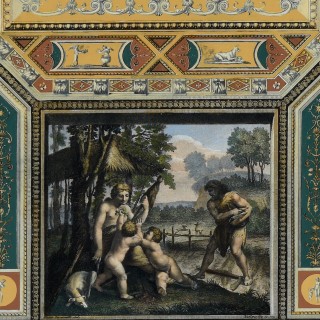 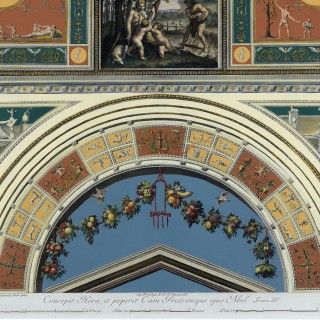 The Vatican loggias (Italian: Logge di Raffaello) are a corridor space in the Apostolic Palace, originally open to the elements on one side, which were decorated in fresco around 1519 by Raphael’s large team of artists, with Giovanni da Udine the main hand involved. Because of the relative unimportance of the space, and a desire to copy the recently re-discovered Domus Aurea style of Ancient Roman painting, no large paintings were used, and the surfaces were mostly covered with grotesque designs on a white background, with paintings imitating sculptures in niches, and small figurative subjects in a revival of Ancient Roman style. This large array provided a repertoire of elements that were the basis for later artists creating grotesque decoration across Europe.[1] The logge now form part of the ceremonial route for distinguished visitors, but are otherwise on the tourist route.
JOHANN OTTAVIANI (1735-1808) AFTER RAPHAEL
Le Loggie di Raffaello [Raphael’s Loggia]
Rome, 1772-1777
Engravings with original hand-colouring.
Only two years before he died in 1520, Raphael undertook a monumental commission for Pope Leo X: a vaulted arcade within the private apartments of the Vatican. Inspired by recent excavations in Pompeii and the Campagna, Raphael covered the Loggia’s walls and ceilings with painted ornament in the antique style. Like Leonardo and Michelangelo, Raphael was inspired by the rebirth of classical art and learning that characterized the Renaissance. For the Loggia, he created a fascinating mixture of formal and “grotesque” elements (“Grotteschi” were subterranean grottos which the Romans painted as their fancy dictated: shells entwined with beasts, history combined with mythology). The Loggia became known as “Raphael’s Bible,” not only for its Biblical paintings but also for its decorative invention.
The engravings of Raphael’s Loggia were published two and a half centuries later in Rome (1772-1777). One of the most luxurious engraved projects of the 18th century, Le Loggie di Raffaello was the first to reproduce the great frescoes by Raphael and his pupils in the Vatican. It was the result of a collaboration between the painter Gaetano Savorelli, the architect Pietro Camporesi and the engravers Giovanni Ottaviani and Giovanni Volpato, all of whom took active interest in preserving for posterity and making available to contemporaries the splendors of the Vatican. Under the patronage of Pope Clement XIV, this gifted team of artists set out to copy not merely Raphael’s biblical pictures but their wonderful ornamental surrounds, rich in pattern and groteschi. The magnificent engravings that resulted from their collaboration are extraordinarily faithful to Raphael’s originals, even more so because they were hand-colored using gouache, a thicker and more opaque pigment than the more common watercolor that was used to color prints. Vivid and sumptuous, these large-scale works are among the most magnificent engravings to have originated in the 18th century. Beyond their purpose as records of Raphael’s frescoes, these splendid engravings served as inspiration for generations of Neo-Classical artists and designers.