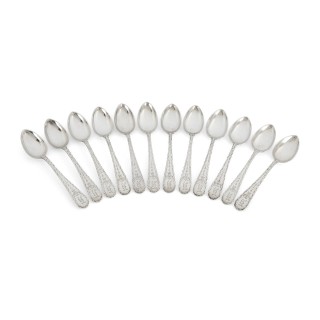 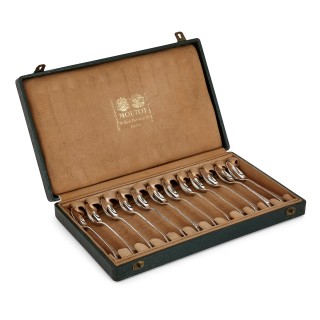 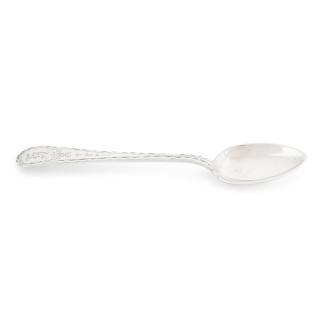 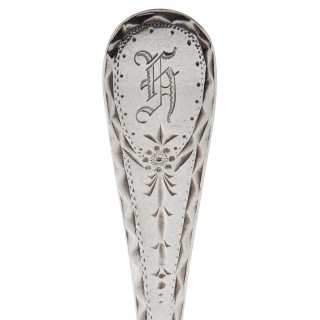 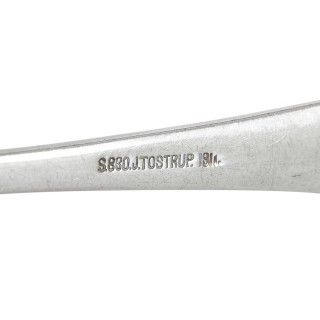 Consisting of twelve teaspoons, this beautiful silver set features ornate detailing on each stem. Within a finely engraved border, each teaspoon’s stem is marked with tiny pattern detailing and a central lettering. The undersides are marked ‘S.830. J. Tostrup. 1911’, indicating the silver purity, maker and date.

J. Tostrup was a Norwegian silversmith firm founded in Oslo in 1838 by Jacob Tostrup. The firm was hugely successful, receiving the title of royal court jeweller, and Jacob Tostrup receiving the Norwegian King’s Medal of Merit. He was also later appointed a Knight of the Royal Norwegian Order of St. Olav, for which he had earlier designed the original enamelled insignia. The firm continued making fine silver items into the 20th Century, when this particular set was produced under the leadership of Torolf Prytz, the husband of Tostrup’s granddaughter.

The spoons are held in a fine leather case, with brown velvet interior and metal clasps. It is gilt stamped on the inside lid for Moutot, the Parisian retailer of the case.