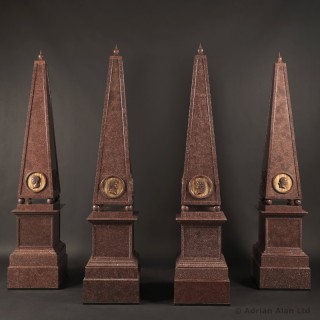 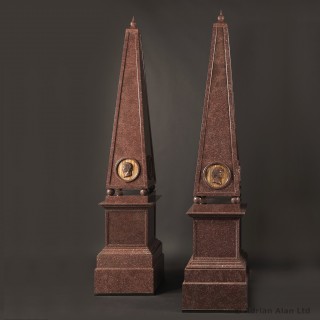 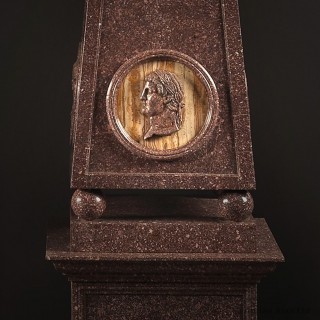 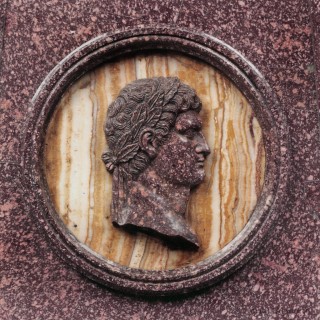 An Important Set of Four Large Porphyry Obelisks. Each obelisk is of square section tapering form with a spiked orb finial and embellished with carved roundels of the twelve Roman Emperors in profile. The main body is raised on ball supports putdown on square sectioned plinth bases.

Porphyry is a remarkably hard, durable rock, which in antiquity derived its name from the fact that its intense, dark red colour, speckled with white inclusions, is similar to the purple colour called purpura by the Romans. The name was extended by association to the massif where porphyry was quarried in Egypt, which the Romans called Mons Porphyrites.

The Romans began to quarry porphyry in the First Century BC, employing it in such large quantities that by the Fifth Century AD the quarries were nearly exhausted. It was used extensively for monumental elements, and it became invested with an Imperial symbolism, perhaps on account of its analogy with the purpura, which from ancient times had been seen as the perogative of regal dignity. The use of Porphyry was in fact limited by Diocletian to the Imperial family.

The Romans used this porphyry for the Pantheon’s inlaid panels, for the togas in the sculpted portraiture of their emperors, and for the monolithic pillars of Baalbek’s Temple of Heliopolis in Lebanon. Today there remain at least 134 porphyry columns in buildings around Rome, all reused from imperial times, and countless altars, basins and other objects.

Byzantium, too, was enamored of porphyry. Constantine the Great celebrated the founding of his new capital, Constantinople (later Istanbul), in the year 330 by erecting there a 30-meter (100′) pillar, built of seven porphyry drums, or cylinders, that still stands. Eight monolithic columns of porphyry support Hagia Sophia’s exedrae, or semicircular niches. Justinian’s chronicler, Procopius, called the columns “a meadow with its flowers in full bloom, surely to make a man marvel at the purple of some and at those on which the crimson glows.”

Porphyry served the imperium in death as well as birth. Nero was the first emperor to be entombed in a porphyry sarcophagus, according to Suetonius. Constantine’s porphyry sarcophagus has been lost, but that of his wife Constantia, decorated with peacocks, lambs, and grapes and thought to be a copy of his, is now in the collection of the Vatican Library. Those of the Holy Roman Emperors Frederick II, Henry IV and William I, and that of the Empress Constance, all porphyry, are in Sicily’s Palermo and Monreale cathedrals.

In later centuries, porphyry columns and other pieces were widely reused in new constructions, often reappearing far from their original Roman context. In 786, Charlemagne received permission from Pope Hadrian to remove classical columns of porphyry from Rome to build his cathedral at Aachen.

This sacred and celebrative significance of Porphyry continued to be greatly appreciated in the Renaissance courts and it was to become a much sought after material by Sixteenth Century collectors. In Florence, Grand Duke Cosimo I, had a particular liking for this stone and sponsored its use in large-scale sculptural works. Given that the ability to execute large sculptural works in this arduous material had long since been lost, such works represented a remarkable technical accomplishment.