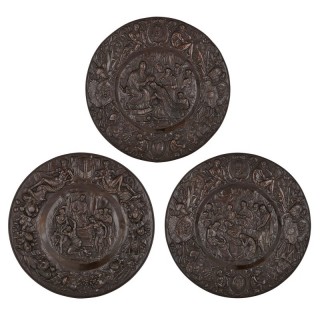 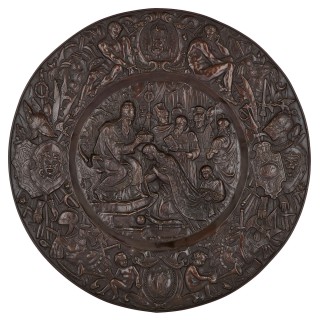 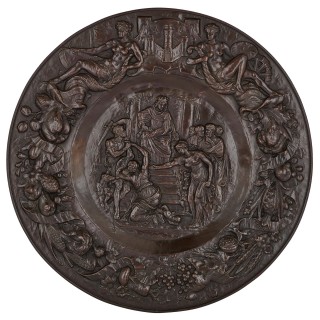 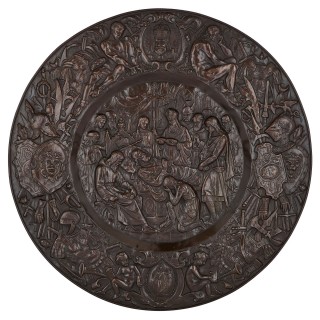 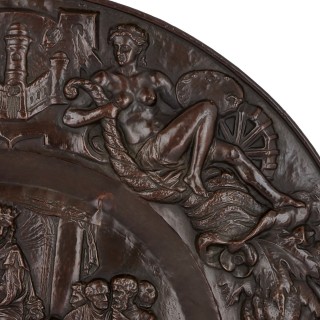 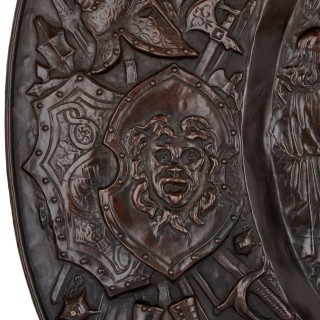 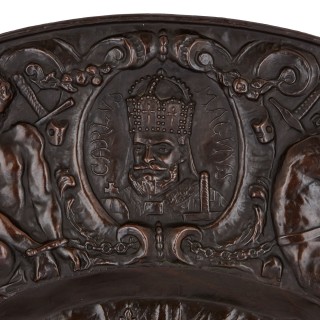 These three circular copper panels were crafted in the 19th Century in France. They are decorated with biblical and Christian themes taken from the lives of King Solomon (d. 931 BC) and King Charlemagne (742 – 814 AD).

One panel depicts a coronation scene at its centre, with the pope lowering a crown onto the king’s head, surrounded by religious officials and military figures. This is encircled by a border, which is decorated with armour and weaponry, including swords, daggers and axes. The bottom of the border features a medallion, flanked by two putti, which contains a full-length portrait of Lady Justice, holding scales and a sword. On the border’s top, a similar medallion, with two chained, male nudes on either side of it, encloses a portrait of a king. This portrait is accompanied by the inscription, ‘Carlus Magnus’. ‘Carlus Magnus’, or ‘Charles the Great’ refers to Charlemagne, the Christian Emperor of the Western world. The border implies that the central image depicts Charlemagne’s coronation, which was orchestrated by Pope Leo III in Rome on Christmas Day in 800AD.

A second panel has an identical border, suggesting that, like the first panel, the central scene is taken from the life of Charlemagne. The image depicts a king on his deathbed, surrounded by a scribe, the pope, praying friars, military officials, and other mourners. There is a clever echo in the motif of the boy, who we see kneeling at both the king’s coronation and at his deathbed. It is likely this scene depicts the death of Charlemagne in 814AD in Rome. The border — again, full of armour and weaponry, as well as the figure of Justice — serves to remind us of Charlemagne’s virtues as a wise ruler and defender of the Christian faith.

The third panel depicts the Judgement of Solomon at its centre. In this story, King Solomon is presented with a baby which two mothers claim to be theirs. Both women had recently given birth, but one baby had died. In order to find out which mother was telling the truth, Solomon called for the baby to be cut in half, so that the mothers might share it. The baby’s real mother immediately offered up the child to the other woman, since she could not watch her own baby be killed. This revealed her to be the true mother, and Solomon returned her child to her. This process was said to demonstrate Solomon’s supreme wisdom. In the panel, Solomon is seen enthroned, while a soldier, with his sword raised, stands before him, holding the child by the leg. One woman kneels, grabbing on to the child, while a second woman tries to restrain her. A group of men observe the scene from a position on the right. This central image is encircled by depictions of fruits and vegetables, spilling out of two cornucopia. Above, two classical style nude women — one accompanied by a wheel and the other a ship — sit on either side of a castle.

These wonderfully-detailed designs have been carefully hammered into the reverse side of the copper panel in a technique known as repoussé. They have then been treated with a brown-coloured patina. The copper panels are engaging pieces of narrative sculpture, which will look beautiful displayed on a shelf or mounted onto a wall.