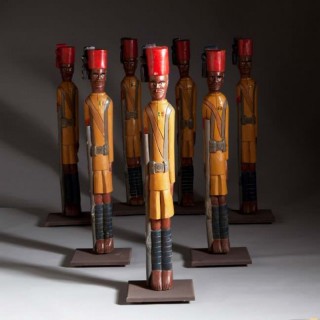 The King’s African Rifles (KAR) was a multi-battalion British colonial regiment raised from Britain’s various possessions in British East Africa in the present-day African Great Lakes region from 1902 until independence in the 1960s. It performed both military and internal security functions within the colonial territory and later served outside these territories during the World Wars. The rank and file (askaris) were drawn from native inhabitants, while most of the officers were seconded from the British Army. When the KAR was first raised there were some Sudanese officers in the battalions raised in Uganda, and native officers were commissioned towards the end of British colonial rule.