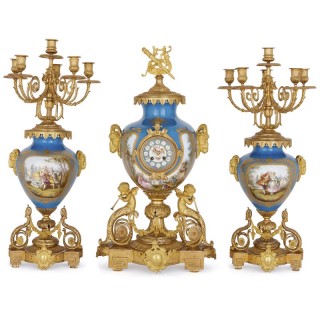 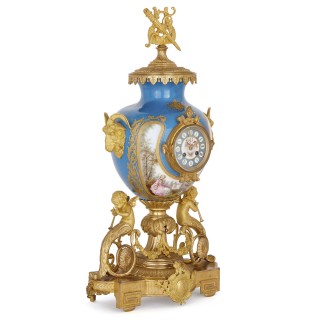 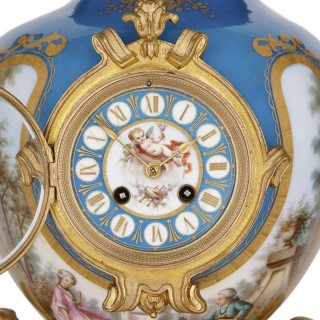 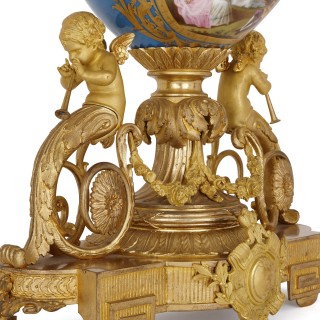 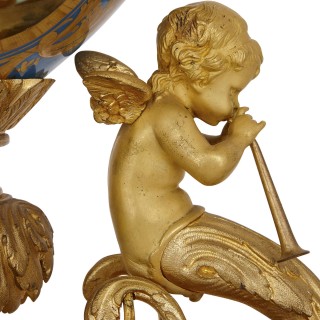 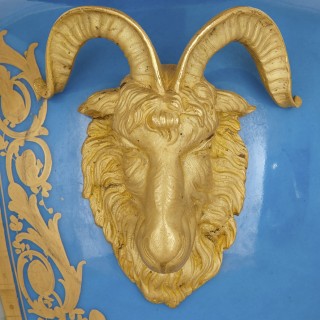 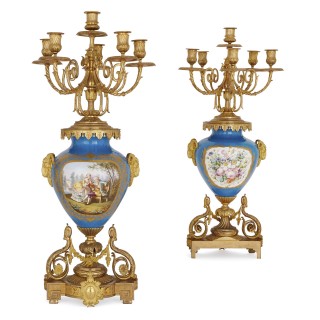 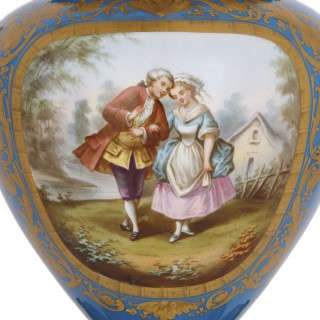 This large clock set—which is comprised of a mantel clock and pair of flanking candelabra—is designed in the style of Sèvres Porcelain Manufactory goods. In the manner of Sèvres porcelain, this set is decorated with delightful 18th-Century Rococo style motifs, including festoons, cartouches, cherubs, and young lovers.

The mantel clock is crafted in the shape of a classical vase, placed on a gilt bronze (ormolu) base. This base stands on Greek key feet, and its front is mounted with a cartouche. A pair of cherubs, their bodies composed of stylised scrolling foliage, sit on the base and blow into long trumpets. Crafted from porcelain, the vase-form clock case is mounted with a gilt bronze stem, and a pair of gilt bronze rams head handles. Its body is finely decorated with an 18th-Century style painting of a courting young couple, within a parcel gilt frame, offset against a bright ‘bleu celeste’ ground. At the centre of the case, there is a circular ‘bleu celeste’ clock dial, decorated with a painting of a cherub in flight, surrounded by white medallions, containing gilt Roman Numerals. This dial is placed within a gilt bronze cartouche. The clock case is topped by an ornate gilt bronze lid with a fringed edge, which is crowned by a classical trophy finial. The pair of candelabra that accompany the clock are similarly designed. Instead of finials, the lids covering their vase-shaped bodies are surmounted by six-light candelabra. Each is composed of six curling acanthus leaf branches, which terminate in wide drip-pans, urn-shaped capitals and simple sconces.

With its romantic paintings of young lovers, its finely cast and gilt cherub sculptures and decorative details, this clock set will make an elegant addition to a well-furnished interior.