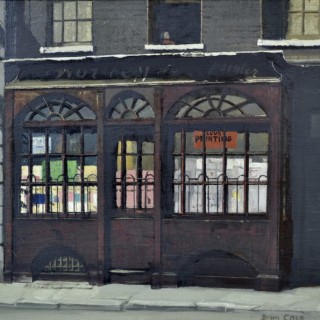 Signed l.r.; signed, inscribed with title and the artist’s address on a label on the reverse
Oil on panel

Provenance:
Sold by the artist at the Royal Academy in 1945.

The Georgian shop front of 13 Moor Street, Soho is in the area known as the Moor Street Triangle, bounded by Old Compton Street, Charing Cross Road and Moor Street itself. No.13 is believed to have been built by William Bignell in 1738 and is one of the few surviving original houses n the street being noteworthy for its elegant early nineteenth century shop front. The ground floor of no.13 now houses a fast food shop.