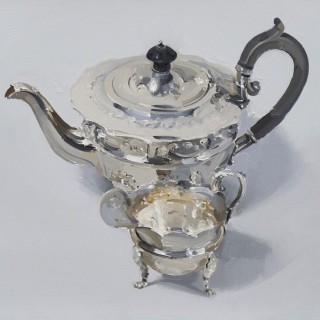 Born in London he was producing works in oils from the age of nine. He studied psychology and art history at university. In 1983 he accepted an internship at the Peggy Guggenheim Collection in Venice. Subsequently, as a cataloguer of modern paintings for Bonhams Auctioneers, he viewed many thousands of paintings and gained a real understanding of detail and effect. In 1986 he moved to Venice and painted outdoor oil sketches in varying light conditions. From 1986 he turned to painting full time, working initially in Italy, then Scotland and since 1991, West Cornwall. He has held numerous solo exhibitions over the last thirty years and has exhibited at the Royal Academy of Arts, The New English Art Club and the Royal Society of Portrait Painters. He is an elected Academician of the Royal West of England Academy. For over twenty years his work was characterised by imaginative figure paintings but currently he engages directly with subject matter that he loves and concentrates on large scale still life, interior and landscape compositions in a fluid and painterly style. Alan is an artist who manages that rare balance in painting, his works appear simultaneously classical yet utterly contemporary in effect. In recent years he has worked towards perfecting large scale still-lifes, each characterised by daringly fluid paintwork and a refreshing economy of style. The subject matter is carefully chosen and each painting is prepared over time with meticulous attention to the balance and harmony of composition. Only when the artist is completely satisfied with all elements of an idea will he approach the canvas, often completing a painting in a bout of uninterrupted activity lasting a single day. Thus a maximum level of energy is maintained in the finished work, stretching the limits of bru shwork with a directness and clarity that excites the eye. ‘In Alan’s paintings the seductive use of dash and bravura remains on a grand scale; his familiar deftness of brush and confident paint-laden strokes seem to have found their optimum canvas size. His work has evolved from subtle, contemplative, domestic set pieces to creations of light, colour and drama that are palatial in conception. I am pleased to say that his paintings have lost none of the other-worldly charm and quiet wit that is so much an extension of Alan’s own personality. Now that twinkle in the palette’s eye is expressed through style and composition not the narrative content as in the past. When standing in front of an original Kingsbury there is no room for disappointment. He is a perfectionist in paint who has mastered the art of making that perfection appear child’s play. Life crackles through his brush and injects such energy into each work that standing in a room of these sumptuous examples of the modern Baroque is a positively life affirming expe rience. For me, Alan is undoubtedly one of the great figurative painters of his generation. In an age where the London commercial art scene is annually suffocated by the numbing homogeneity of the latest Florentine graduates, Alan’s paintings and talent scream integrity and substance.” Matthew Hall