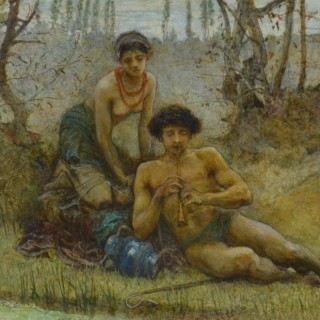 The Pipe’s of Pan

Signed with initials and dated 26/2/74
Watercolour and bodycolour

Herkomer was born in Waal, Bavaria, the son of a wood carver. His family moved to Southampton in 1857 and he entered the South Kensington Schools in 1866 where he studied under Luke Fildes. From 1869 he began working as an illustrator for The Graphic and sent his first works for exhibition at the Royal Academy. Thereafter he was to be a regular exhibitor both there and elsewhere becoming a highly successful painting of social realism, portraits, landscapes and historical subjects. Herkomer was very much a polymath, composing music and writing operas, involved in stage design, an actor involved in the beginning of cinema and a keen motorist. He founded and directed the Bushey School of Art and was Slade Professor of Fine Arts at Oxford. Works by him are in many public collections including the Tate Gallery.