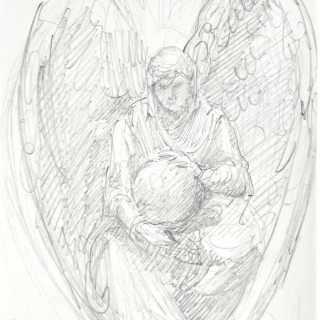 Study of an Angel

William Blake Richmond was the son of the painter and watercolourist Goerge Richmond. After first studying with his father and having early coaching from John Ruskin, he entered the Royal Academy Schools in 1857. He first exhibited at the Royal Academy in 1861 and established a career as a successful painter of large neo-classical subjects and portraits. Following a trip to Italy in 1864 he came under the influence of Frederic Leighton and Giovanni Costa and became a devotee of plein air landscape painting. He was also a designer of stained glass and mosaics, his major work in this medium being the decorations below the dome and n the apse of St Paul’s cathedral.