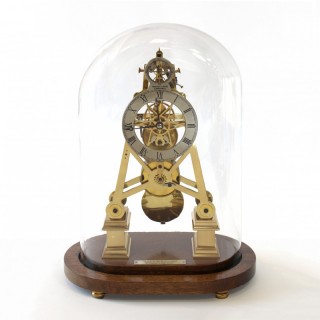 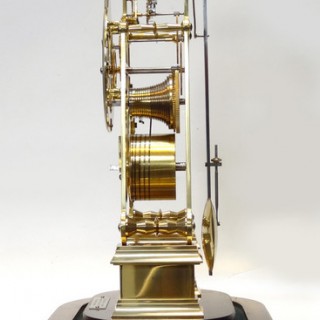 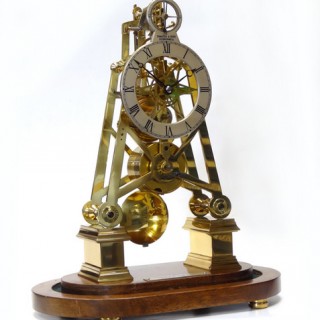 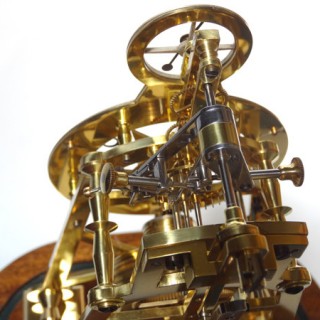 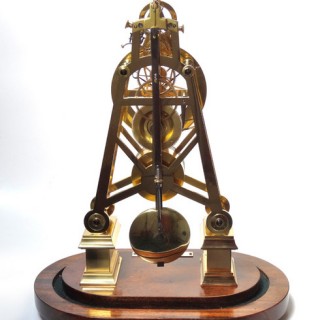 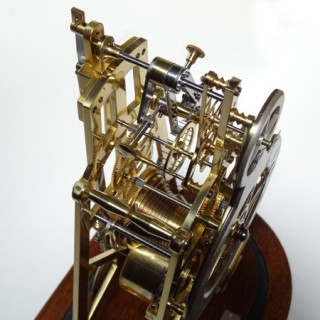 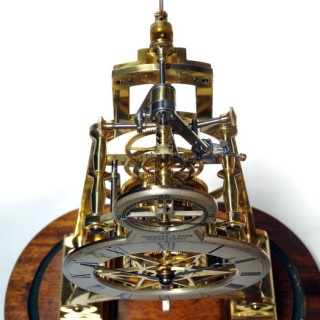 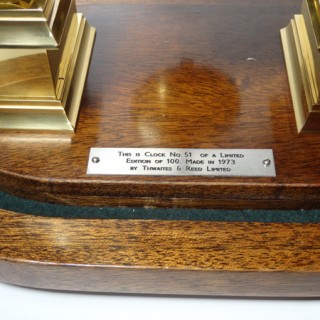 Part of a limited edition of 100 pieces, this fine skeleton clock by Thwaites and Reed,the design of which was inspired by the work of John Dwerrihouse (1770-1805) dates from 1973. This features an exceptional and highly sophisticated escapement, which is a feat of engineering.

Thwaites and Reed were one of the oldest and among the best of London’s clock manufacturers.

The 8 day fusee timepiece movement has Harrison’s maintaining power and adjustable pallets for the Coup Perdu escapement. Coup Perdu literally means “lost beat” and allows the clock to show true seconds on the subsidiary dial when the clock is beating as the clock impulses on one pallet.

The tapered polished brass plates are raised on square-section pillars mounted on a wooden base on screw adjustable brass bun feet. The clock has its original glass dome.

The silvered skeletonised dial has a signed plaque above and subsidiary seconds chapter, also silvered.

Aynsworth Thwaites made his first clock in 1740, probably for the Horseguards Parade, London, where the Trooping of the Colour Ceremony takes place each year, and in 1768 added a ting tang chime. Such was his workmanship that the clock is accurate as the day it was made and with Thwaites and Reed’s expert maintenance will continue to give many more years of service.

Thwaites was elected a Freeman of Clockmakers’ Company in 1751, his sons established the partnership with a relative, George Jeremiah Reed and this partnership is the foundation of today’s business.

At the Guildhall Library in London there are historical records of over 300 Thwaite and Reed mechanical turret clocks still happily ticking away in town halls, commercial buildings and church towers – including London’s famous Bow Bells. Notably they were responsible for rebuilding and continual maintainance of The Great Clock at the Palace of Westminster, affectionately known as Big Ben.

The company is best known for turret clocks, tavern clocks and dial clocks. A large proportion of their work was originally carried out on behalf of other clock makers, many of them famous in their own right, such as Barraud & Lund, Dutton, Ellicott, Earnshaw and Hedge, in fact you could order any name on the dial when you ordered the clock. It has been estimated that up to about 50% of all Edward Ellicott’s new work was in fact the product of the Thwaites company. Company records show that between 1842-1899, the company produced over 1400 dial clocks, mostly on behalf of other makers and retailers. The company was quite prosperous and paid their workers well. In about the 1840’s they were paying their clockmakers £1 15s a week, compared to the £12 a household servant would earn in a year.

A useful method of telling a Thwaites clock under another name, is that Thwaites often marked the inside of the barrel caps with their name and serial number. In the English Dial Clocks book pp 30-33 shows some extracts from Thwaites & Reed’s records 1780-1863. In the Antiquarian Horology, September 1973 pp 372-381 there is a very detailed article on the production and dating of A & J Thwaites clocks (& associated letters in Dec 1973 pp542 & Mar 1974 pp 649).

In the 1900’s the business was sold to the Buggins family and they certainly still owned the business in 1945. After reorganization in the 1970’s, the company name was taken over by F. W. Elliott, and moved form Clerkenwell to Hastings. Currently, this latter company became the subject of a takeover, and was sold to a Mr. Lee in the 1980’s. Thwaites was again put up for sale in 2001.

In the ‘The Price Guide To Collectable Clocks’ book it is also shown that they made Night Watchman’s clocks for use by other retailers, there was also one under Thwaites own name shown at the ‘Industrial Timekeeping Systems’ exhibition at the Manor House Museum, Bury St Edmonds in 1995. Thwaites & Reed are also known for their limited addition clocks such as the Congreve rolling ball clock (both full size and half size), and the ‘Spherical Weight’ driven clock.

Over the years the company also produced about 300 turret clocks, the most famous probably being the automaton clock for Fortnum and Mason, the famous London grocers. They also overhauled the astronomical clock at Hampton Court in 1947, and provided an astronomical dial for the Smithsonian Institution in Washington. In 1961, the company produced a number of remarkable reconstructions of the De Dondi astronomical clock. In later years, the company became responsible for the maintenance of the Great Westminster Clock (Big Ben) up until 2001.