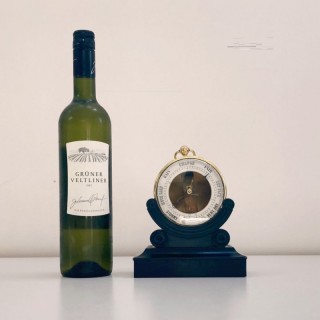 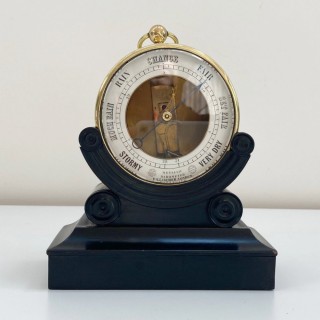 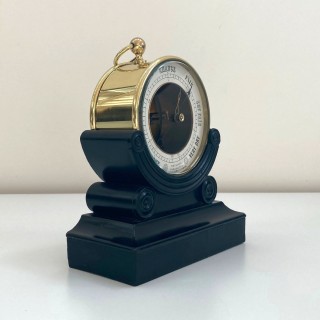 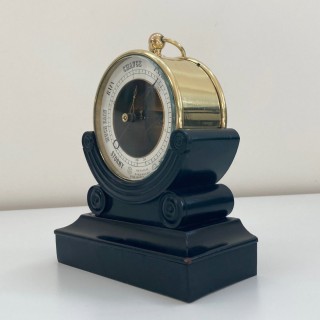 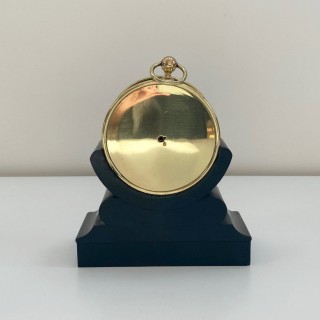 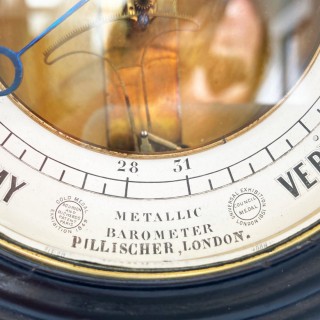 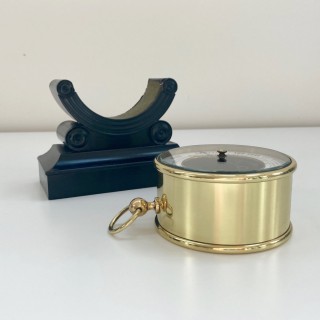 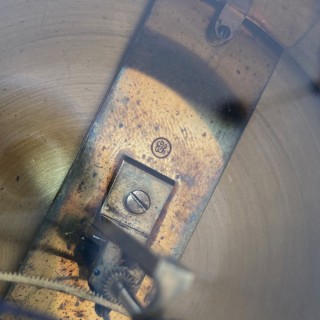 This very rare example of a bourdon barometer has a three and a half inch paper dial showing 28 to 31 inches of barometric pressure through a thick bevelled glass and with an open movement to the centre. It has a blue steel indicating hand and an intricate brass pointer operated by a knurled knob to the front of the glass. The card dial is also printed with the name, “metallic barometer” with reference either side to the awards that Bourdon’s invention had won at both the “Paris Exhibiton 1849, Bourdon & Richard Patent” (Gold Medal) and at the “Universal Exhibition, London 1851” (Council Medal). Unlike most aneroid barometers of the period, the case has a removable back plate with a slot which is secured by means of a pin affixed to the drum. To remove the plate, the slot is aligned with the pin and it lifts off.

The movement has Bourdon’s tell-tale crescent shaped flattened vacuum tube with fan shaped rack operated by twin levers and is stamped to the top of the mechanism with “EB” for Eugene Bourdon which is a tell-tale sign of it being an early production example. Later examples are stamped with FB or JR for Jules Richard. It has no other engravings but also has signs to its early pedigree as it has the early pointed fan shaped rack rather than the later “tear-dropped” version.

The barometer is set upon an ebonised wood, three part stand with plinth base and a semi circular rest which is decorated with turned roundels and shaped veneer. The rest is shaped to receive and hold the barometer in place firmly and it has a baize liner within to avoid scratches to the instrument when it is in place.

The retailer of this fine instrument was Moritz Pillischer, a London instrument maker of Hungarian descent who moved to England and opened his own premises in 1849. Clearly a capable maker before his arrival to the UK, Pillischer was able to secure himself a place at The Great Exhibition of 1851 where he displayed numerous wares. It is perhaps Bourdon’s appearance at the 1851 exhibiton that allowed the pair to form a business relationship for Bourdon’s new aneroid barometer.

Pillischer also exhibited at the London 1862 exhibition where he was awarded a prize for his microscope, Vienna in 1873 and at the 1889 Paris Exposition although by 1887 Moritz had handed the business over to his son Jacob.

The founder died in 1893 but the business continued under family ownership until 1947, it traded from 88 Bond Street for the majority of its trading life.

The French engineer Eugene Bourdon (1808-1884) was an early competitor to Lucien Vidie (inventor of the bellows movement) registering his crescent shaped mechanism design in 1849; it was produced under licence alongside Felix Richard, who with his brother Jules would later form the company, Richard Freres renowned for their developments to the barograph in France. Bourdon’s designs for both barometers and pressure gauges were met with approval at The Great Exhibition in 1851 winning him a council medal alongside his competitor Vidie. Bourdon’s movement however were slightly more fragile than Vidie’s and although they continued to be produced until the turn of the century, they were less well received.

As early as 1863, Admiral Fitzroy, Chief of the Meteorological Department of the Board of Trade commented that, “they are not so well adapted for travellers, nor for the measurements of considerable elevations, as Vidie aneroids”, which in some part contributed to the lack of uptake in the UK. Bourdon continued to work on numerous other designs and eventually became more renowned for his work on pressure gauges. He was a prolific inventor and died in 1884 whilst undertaking experiments on the effects of wind on steam locomotives. A fall from a moving carriage resulted in a head injury from which he died a few days following the accident and was buried in Pere Lachaise cemetery, Paris. His barometer movements are today prized for their workmanship, beauty and for their rarity.

This example is amongst the earliest of bourdon barometers and is significantly rarer for its diminuitive size and accompanying stand. A superb example.