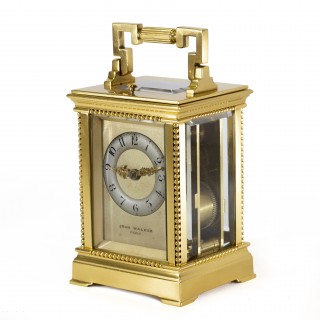 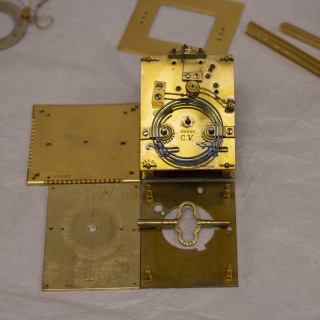 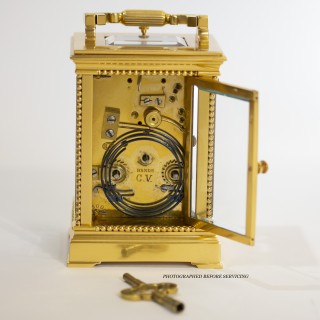 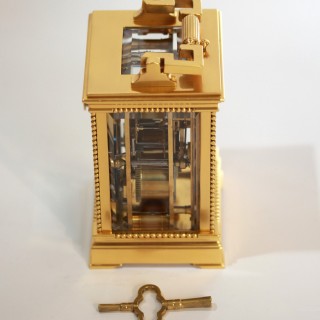 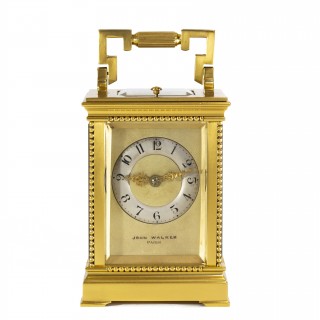 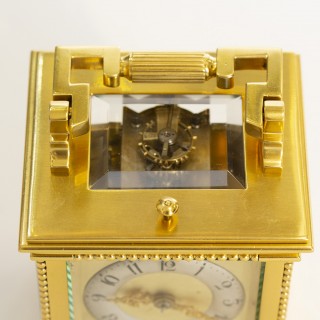 The eight-day movement strikes and repeats on a gong. It is regulated by its original silvered platform escapement. The backplate is stamped with the trademark of Drocourt, a D and C separated by a clock, and with the serial number 25007. Many of the case parts also bear the serial number. The backplate is also stamped C.V. – Leigh Extence has carried out considerable research into the Drocourt family and clockmaking history and his research indicates C.V. are the initials for the supplier Charles Valogne, a friend of Alfred Drocourt’s from London who was associated with the Dent firm and who also supplied clocks from Jacot. Valogne presumably bought the movement from Drocourt, cased it and sold it on to John Walker (clockmakers & retailers) in Paris. A fine provenance.

The clock is sold complete with its original numbered key.

The dial has a signed gilt mask and a raised silvered convex dial ring, painted with Arabic numerals.

Pierre & Alfred Drocourt were among the top makers of carriage clocks in the mid to late Victorian period, having a factory at Saint-Nicolas-d’Ailermont in France, and in Paris at Rue Debelleyme 28 and Rue de Limoges.
Drocourt made superb carriage clocks that were often decorative and were awarded numerous medals at exhibitions, such as the Bronze Medal at Paris 1867, the Silver at Paris 1878 and the gold at Paris in 1889.
The son, Alfred Drocourt, succeeded his father Pierre Drocourt sometime in the 1870s.

The movement is photographed in its condition pre-servicing, but it will be fully overhauled and guaranteed for 3 years.

It is also shown next to other carriage clocks for size comparison – three-quarters, giant, and standard.