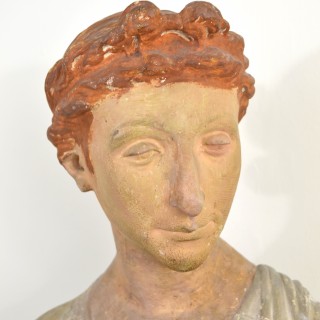 Domenicho (Domenico) Brucciani (1815-1880) was born in Lucca, Italy and migrated to England in the first half of the nineteenth century. He established a business which produced casts of sculptural works from international collections. By 1837 he owned a showroom near Covent Garden and was selling works to the British Museum and the South Kensington Museum (now the Victoria and Albert Museum). By 1857 D. Brucciani & Co. were working for the British Museum, making moulds and casts of their classical sculptures, bronzes and other pieces, to be sold commercially.
The company was successful during Brucciani’s lifetime as it capitalised on the nineteenth century fashion to have plaster casts of sculptural works in the home. Following his death his business was purchased by another Italian, Joseph Caproni (1846 – 1900), who retained the name D. Brucciani & Co., and the business continued to manufacture casts, with customers including the Fitzwilliam Museum and the Museum of Classical Archaeology.
However, as demand for plaster casts declined in the twentieth century, the business failed. Consequently, it was purchased by the V&A and operated as the Department for the Sale of Casts until 1951 when it was forced to closed due to financial losses.
This cast was made in second half of the19th century from a terracotta bust in the collection of the Victoria & Albert Museum. The bust represents a female saint, sometimes called St Cecilia. The Victoria & Albert bust was initially ascribed to Donatello but it has now been revealed that the bust is a “pasticcio”, where a head, modelled in the mid 19th century, has been fitted upon a damaged bust, probably dating from around the second half of the 15th century.