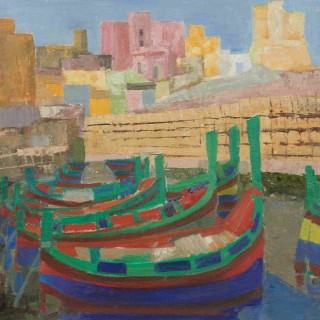 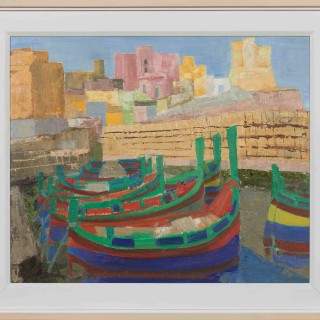 Original Oil painting on board by German born artist Grete Marks.
Available at Panter and Hall.

Grete Marks was born in Cologne, Germany; she studied at the Bauhaus School of Arts in 1920. Her early career saw her see great success in the ceramic industry with her own ceramic works committed to progressive design. However she was forced to flee Germany as the National Socialists forcibly purchased the business in 1934 in the growing tide of anti-semitism. Grete came to England with the help of Ambrose Heal, whose department store had regularly stocked Grete’s products and once here she continued to work in ceramics at Mintons and in Stoke.

Grete also painted throughout her life and by the 1950s she was a regular exhibiter at the Redfern Gallery in Cork Street. The gallery’s influential director at this time Rex Nan Kivell hung her work alongside those of Nicholson, Scott and Piper. A selection of Margrete’s pottery is currently on show at the Jewish Museum, London.

Today her works can be found in the Bauhaus Archiv, the Victoria & Albert Museum, The Royal Festival Hall, the National Museum of Wales and The British Museum. Grete died in London in 1990, aged 91.