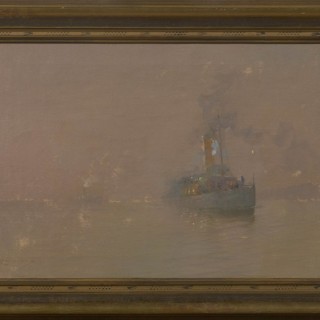 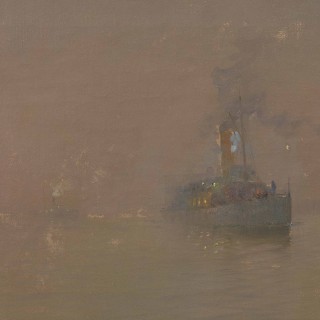 Original Oil on canvas by Modern Swedish artist Arvid Claes William Johanson.
It won’t go unnoticed that I’ve slipped in a few Swedish painters this year. We have a few thousand mid-century Nordic paintings that live in our Cecil Court basement, largely kept at an affordable price level for our many interior designer clients who tend to arrive in a large van. There are a select number of more serious Swedish paintings that we tuck away for special events – the Dealer’s Eye show being just that. This atmospheric steamer gliding out of the sea mist is typical of Johansson’s work. Although a Swede by birth he became one of the most celebrated marine artists in France, eventually becoming the official painter to the French Navy.
Available at Panter and Hall.

Son of a marine painter, Johansson was born in Stockholm, Sweden. His future was decided for him studying art first in Stockholm and then in Düsseldorf. He spent some time in the studio of the Dutch marine painter Hendrik Willem Mesdag at the Hague before moving to France. His first marine paintings were noticed at the Paris Salon by the journal Gil Blas in 1888, “a young Swedish painter whose canvases were noticed at the last Salon, is sending two very interesting seascapes this year, one of which, a view of the port of Grandville at night, is most remarkable, in our opinion. Moon effect very curious, striking set, and which marks that the artist, a former sailor, understood the sea, as a lover and, as a poet, while remaining an exact and scrupulous observer of truth.”

Johansson then began to produce illustrations for Swedish and French magazines which brought him to the attention of the French Ministry of the Navy. In 1898 he was appointed Official Painter of the Navy and spent time on French warships sketching and painting. From 1900 his style loosened noticeably. He was made an officer of the Légion d’honneur by the French government and on his death.