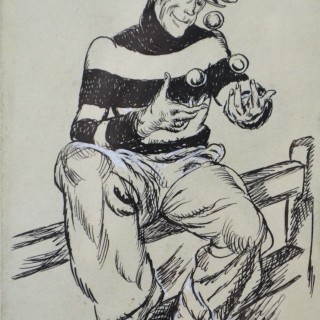 After an apprenticeship to his silversmith father, Spurrier studied art and became a freelance magazine illustrator contributing to such magazines as The Graphic, Illustrated London News and the Radio Times. He also produced posters for theatrical productions and illustrated books. From 1913 he exhibited his paintings at the Royal Academy, a favourite theme being circus performers. During the First World War he worked with the Admiralty developing dazzle camouflage for ships. Works by him are in the collection of the Imperial War Museum, Tate Gallery and other public collections.

Charlie Chaffinch is a in character Howard Spring’s children’s story Sampson’s Circus. It was illustrated by Steven Spurrier and published by Faber & Faber in 1936. It was one of two commended runners up for the Library Association’s inaugural Carnegie Medal, recognising the year’s outstanding contribution to children’s literature by a British subject.