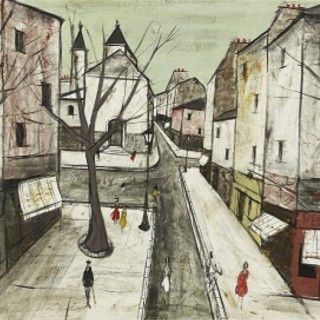 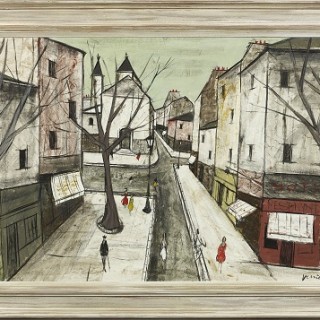 Street in Montmartre by Charles Levier

Born to a French father and American mother in Corsica, from an early age he held a fascination with colour and form that led him, at age seventeen, to the École Nationale Supérieure des Arts Decoratifs for private studies. During World War II, Levier served in the French Army in North Africa, later becoming Liaison Officer with the U.S. Office of Strategic Services. After the war, Levier divided his time between the United States and France. His first one-man show opened at the Galerie Constantine, in Lyons in 1949, followed by an American debut in Los Angeles in 1950. Levier continued to have gallery shows on both sides of the Atlantic. Levier’s works are represented in the collections of the Museum of Modern Art, Paris and the Menton Museum, Paris. In the United States, his work can be found in the permanent collection of the Atlanta Museum, the Seattle Museum, the Evansville Museum, the New Orleans Museum and the San Diego Museum. Private collectors have included Dean Martin and Frank Sinatra.

Street in Montmartre by Charles Levier