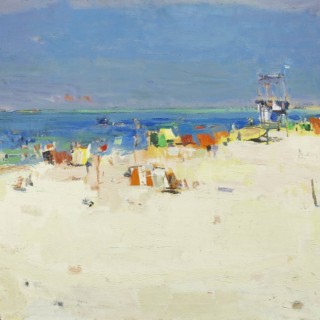 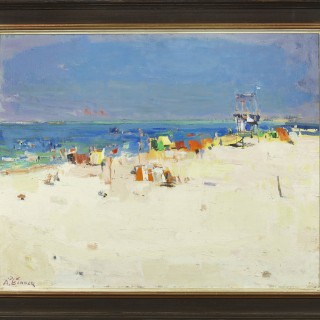 Avraham Binder was born in 1906 in Vilna. He began painting at an early age and completed the prescribed studies in painting at the academy of arts in his native city. Already upon graduation, at the commencement exhibition of works submitted by the graduates, he was awarded a prize in recognition of his talents. The Binder family immigrated to Palestine at the end of the 1920′s. Avraham’s father opened a bookbinding workshop in Tel-Aviv, while the son turned to painting. Many of his canvases – portraits, landscapes – are in the possession of dozens of collectors. He has had many exhibitions in Israeli galleries as well as museums – in particular, the Tel-Aviv Museum of Art. He has also exhibited abroad, especially in the United States. Particularly memorable are his urban landscapes with their predominance of blues and aquamarines, composed of a profusion of squares and rectangles, crowding one another and covering nearly the entire canvas. The angular shapes are interspersed with radiant dots of red, gold and yellow, like the lights of the big city. Those squares and rectangles reflect, perhaps, impressions of a childhood spent among books which were scattered about the home and workshop of his father, the bookbinder. These shapes, no doubt, had their influence upon the artist whose first youthful impressions were – books. Traces of these shapes are discernible in Binder’s work to this day, in the angularity of splashes of colour which, no longer crowded together, are now well separated to create an airy spaciousness. Not only the splashes of colour – the inventing space, too – creates figurative effects in the artist’s treatment. Avraham Binder is not a “cerebral” painter. Neither identified with any particular modern school, nor preaching any narrow artistic doctrine, he is an emotional artist: his inspiration, derived from the heart, leads him on to the most varied range of treatments in his artistic work. In vain might one try to persuade him to define his personal conception of painting. He is not one to indulge in verbal explanation. But his sheer artistic skill, his virtuosity with the paint brush, did impel him to experiment widely with the artistic techniques of the modern age. And his exceptional talent stood him in good stead in all this experimentation. Binders large-scale urban landscapes are not mere constructs to represent out present-day architecture with its pervasive angularity. Made up as they are of color, Binder’s unique color composition qualifies these canvases to be ranked among the foremost artistic works in Israeli painting. They are uniquely Binder, very different from what we see in the work of his contemporaries. Here and there, Binder also introduces the human element into these paintings. He lives and breathes the atmosphere of his surroundings, deeply experiencing the sea and the shore of Tel-Aviv that confront him day after day, and which he has transferred to his canvases, as metaphors in paint, throughout the life. More recently, he has created a new series of shore-and-seascapes, in tones ranging from brown to blue. ochre, violet and pale yellow – marvelous views of the sea and of figures enlivening its shore. In yet another series, featuring nearly the same range of hues, he lets us view, through his eyes, the Carmel Market in Tel-Aviv, or the city’s coffee houses with their crowds of people, heads bunched together as if in search of human closeness, with the windows looking in upon them. He has also done large paintings of Jerusalem – not the Jerusalem of gloom and holiness, but a Jerusalem in contrast to the flat topography of Tel-Aviv; it is this different topography which here provides the challenge for him as a painter. And the colours – the colours are bright, full of light, an inner illumination which seems to emanate from the artist himself, rather than from the sun beating down from above.