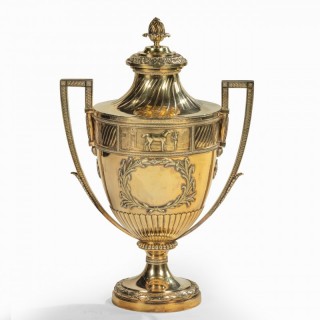 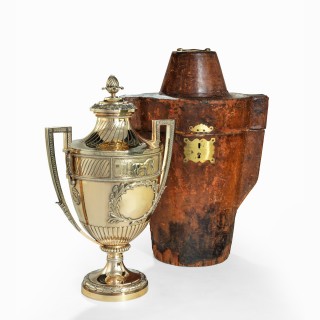 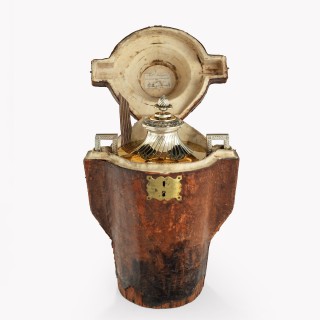 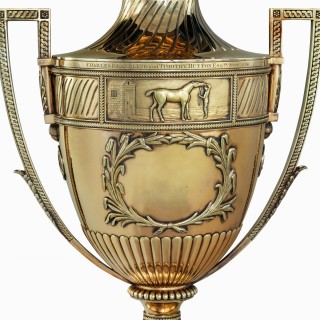 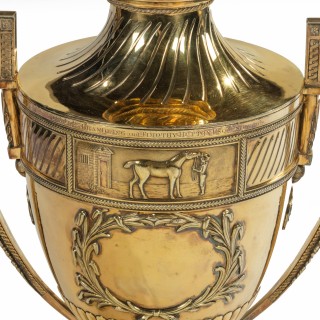 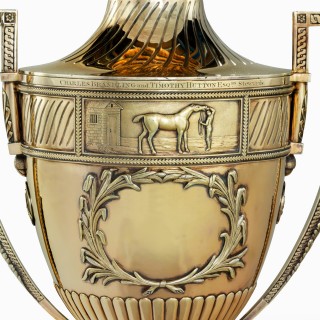 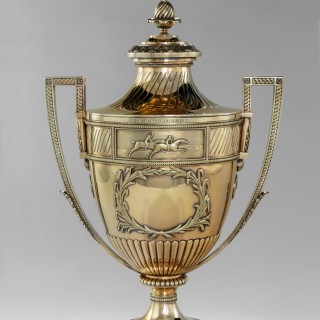 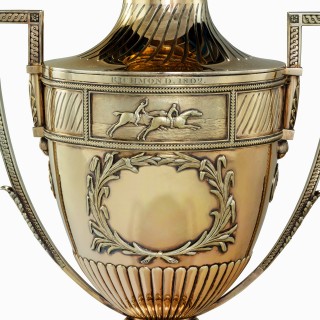 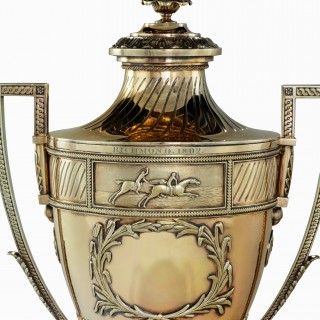 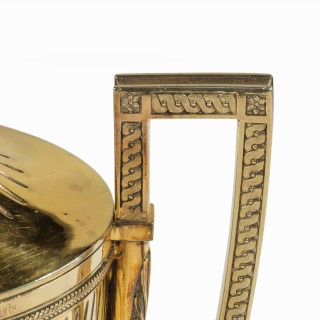 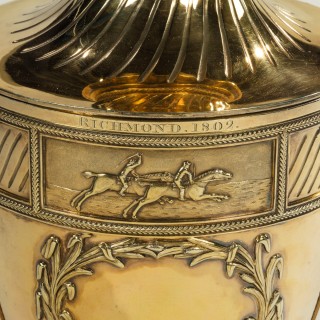 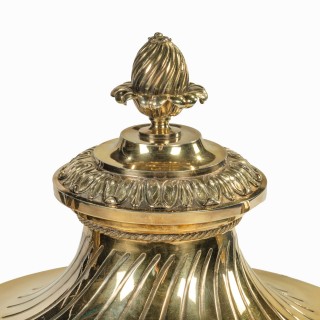 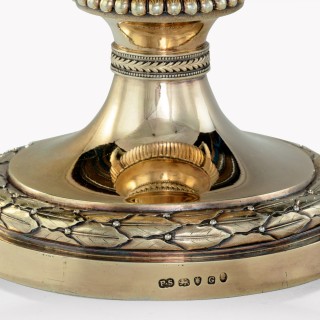 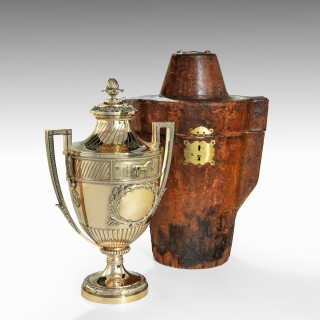 This exceptional silver-gilt trophy was made by Paul Storr in 1802, by arrangement with the London retailer Robert Makepeace. It is in the form of a classical footed cup with squared handles and separate shaped cover. It is embossed, chased and engraved with a fluted frieze enclosing two rectangular panels, one showing two horses racing under the words ‘Richmond 1802’ and a horse and groom under the names ‘Charles Brandling and Timothy Hutton Esq.rs Stewards’. The arms of Richmond appear under one handle and a roundel with a Tudor rose encircled by the motto ‘St Guillem Burgi Richmond’ under the other. There is a vacant reed-framed cartouche on each side above gadrooning and a knopped stem. The foot is encircled by a victor’s laurel wreath and fits onto a separate wooden socle. The cup has been preserved in the original velvet-lined shaped leather case which has a brass lock plate, closures and carrying handle, and a paper label reading ‘Robt. Makepeace, Goldsmith and Jeweller, Serle St. Lincoln Inn Fields’ inside the hinged lid. English, 1802.

The ‘Gold Cup’ was an early example of a prize race where the trophy was paid for by subscription and, due to the importance of Richmond, Yorkshire, as a racing centre in the 18th and early 19th centuries, it is indicative that no less than Robert Adam was employed to design a new version of the cup in 1757 and, in 1802, no less a silversmith than the outstanding Paul Storr, was chosen to make the present example. By repute, the silversmith chosen to make the trophy each year was told to make the best they possibly could for a budget of 100 Guineas.

The cup is not engraved with the details of the winning horse or its owner, merely the names of the two stewards, Charles Brandling and Timothy Hutton. Research has revealed that Charles Brandling, of Gosforth Hall in Northumberland and a very well-known sportsman of his day, died in 1802. Hutton was a wealthy Yorkshire landowner and racehorse owner, his seat being Clifton Castle. Although Richmond Racecourse has long ceased to exist and its records seem to have disappeared, an 1804 publication The Sporting Calendar (Vol. 24) includes a complete list of winners of the Richmond Gold Cup. The winner of the race in 1802 was Sir William Gerard with his horse Asheton. Asheton was sired by the famous stallion Beningborough. Sir William Gerard (1773-1826) of Garswood Hall in Ashton-in-Makerfield married Anna Maria Stapleton and it is through the female line of the family that the cup descended to the present. Horse racing had been active in Richmond from 1576, and the grandstand, paid for by public subscription in 1775, is believed to have been designed by John Carr and is now the oldest surviving stone-built public grandstand in the world.