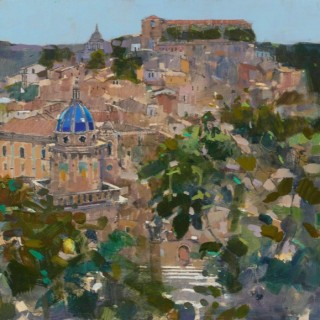 From the Artist’s Studio

Exhibited at the Seven British Impressionists show at Panter and Hall in 2022.
E-Catalogue available: https://ebooks.panterandhall.com/other/seven-british-impressionists

Born in London, David graduated from Canterbury College of Art in the early 1980s. Since then, he has worked continually as a fine artist including a brief period as a scene painter. He has held numerous solo exhibitions in private galleries and exhibited widely with public institutions, notably the New English Art Club, The Royal Society of British Artists, The Royal Institute of Painters in Watercolour, and the Chelsea Art Society. He has won many prizes at the societies’ annual shows and is an elected member of both the Royal Society of British Artists and the Chelsea Art Society. Past commissions include a series of London views for a City boardroom in the Fried Frank building and paintings for the State Rooms of Cunard’s new Queen Mary II.

He writes regularly for the national art press and his articles on painting technique are well known amongst his peers. Regarded as one of Britain’s leading contemporary landscape painters, David works between a small studio space in London, where he formulates his ideas, and a large studio in south-west France, where he develops grander-scale works. His primary interest has been in architectural subjects, how light reveals form and structure of buildings and develops the mood and atmosphere around our experience of them.

In 2019, David had the honour of accompanying TRH The Prince of Wales and The Duchess of Cornwall on their tour of St Lucia; Barbados; St Vincent and The Grenadines; St Kitts and Nevis; Grenada; the Cayman Islands; and Cuba. David has exhibited with Panter & Hall since we began 20 years ago and it was a great privilege to have held his first tour exhibition here in Pall Mall.