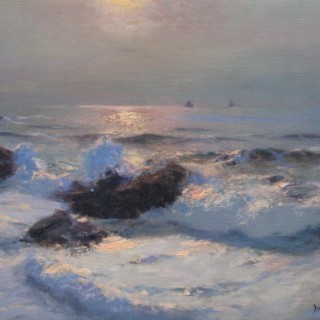 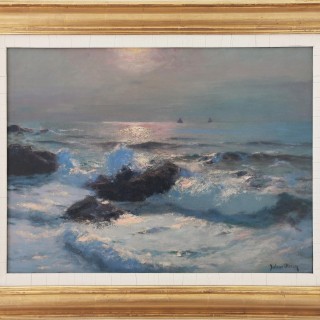 Born in London in 1864 to a Swedish father and English mother, Olsson was entirely self-taught. This allowed him to develop his own style of sea-painting, free from the traditions which had dominated the genre.

His ability to capture the ephemeral nature of sea and sky is renowned but it is perhaps his sensitivity to colour which makes his seascapes “stand out” (David Tovey, Creating a Splash). In particular, Olsson broke new ground in his observation that foam, traditionally depicted as white, in fact contained a myriad of colours, reflecting shades from sky, cloud, and sea.

Olsson worked mainly in Cornwall and died 7 September 1942 at Dalkey, Ireland. There was a Memorial exhibition at the R.B.A. Galleries 1952.

He is represented in several public collections.