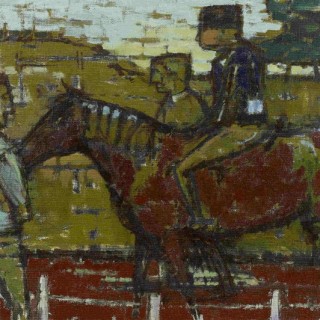 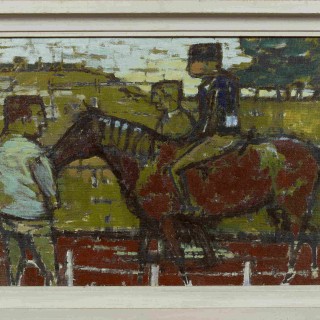 Oil on canvas painting by Ida Cooke (1909-1982) Ida Cooke was born in New Plymouth, New Zealand in 1913 but left in the 1930s to study at the Slade School of Art in London. It was here that she won the Slade Prize for Life Painting in 1933 and the Orpen Bursary in 1934. Ida settled in England but continued to travel, training for a time under the tutelage of the German expressionist painter Oscar Kokoschka at his School of Art at Salzburg, Austria. Shortly after this she won a gold medal at Accademia Italia delle Arti e del Lavoro. During Ida Cooke’s career, she exhibited widely including at the Royal Academy, Royal Society of British Artists, New English Arts Club, Royal Society of Portrait Painters, Royal Institute of Oil painters, Women’s International Art Club and London galleries such as John Whibley Gallery and Quantas Gallery. Ida Cooke had numerous solo exhibitions most notably at the Woodstock Gallery in 1966, London Hilton Gallery in 1971, Clarges Gallery in 1973 and the Centaur Gallery in 1980. Her work is now to be found in collections throughout Europe, USA, Australia and New Zealand. “Ida Cooke’s style is instantly recognisable; this style does not happen overnight but evolves as a result of pain, toil and tears. The background of her achievement shows impeccable credentials. Born in New Plymouth, New Zealand, she came to London and studied at the Slade School of Art under Professor Tonks. Anyone who knows or has read about that period will have realised that to succeed required talent, ability and hard work. To have won the Slade Prize for Life Painting (1933) and Orpen Bursary (1934) is to be brilliant. The United Society of Artists regrets the sad loss of such a valuable Member, but can feel proud that her distinction adds to the prestige of the Society.” Obituary from The United Society of Artists, 1982