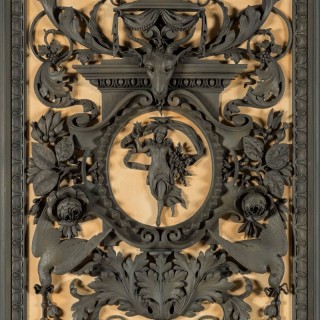 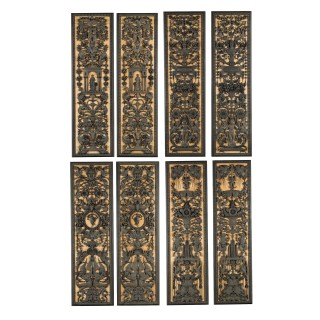 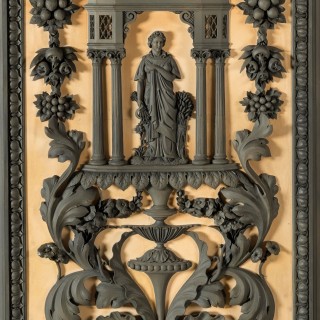 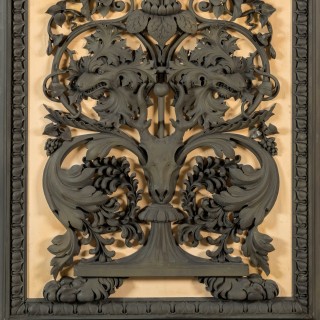 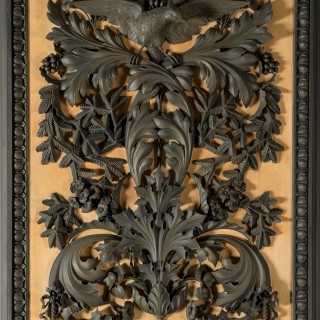 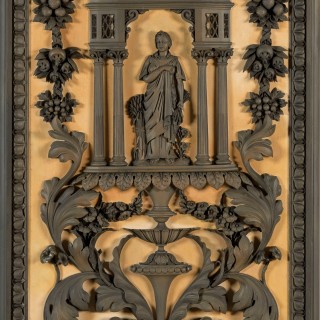 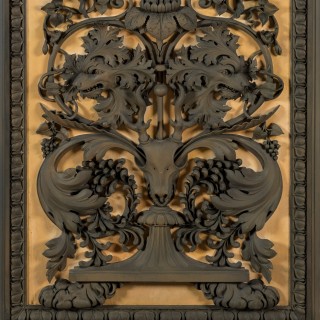 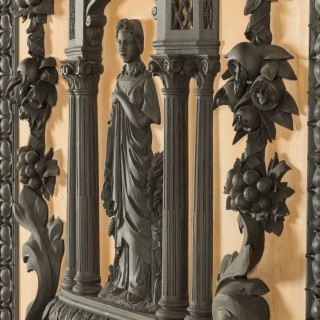 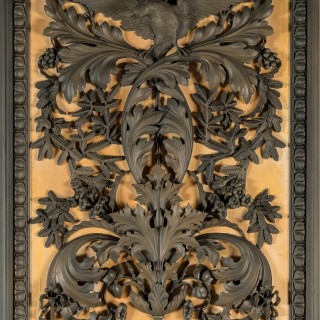 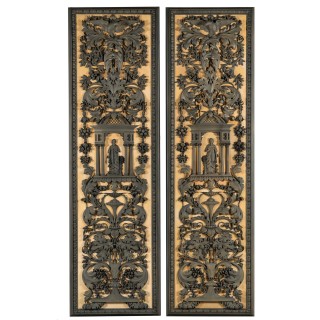 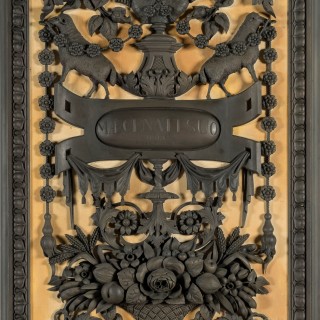 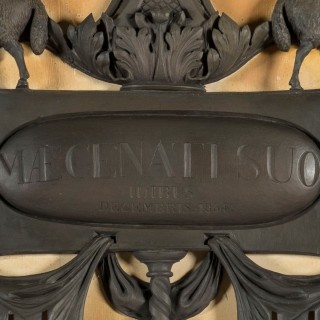 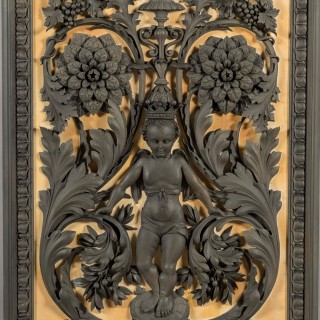 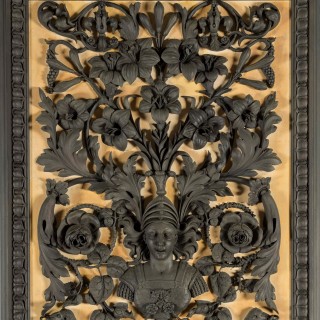 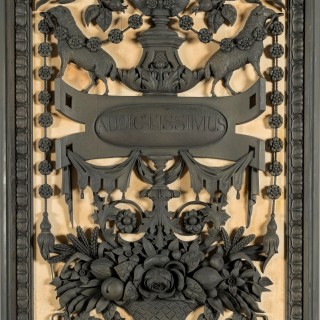 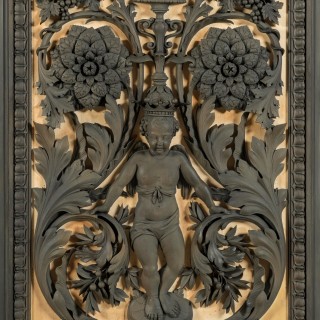 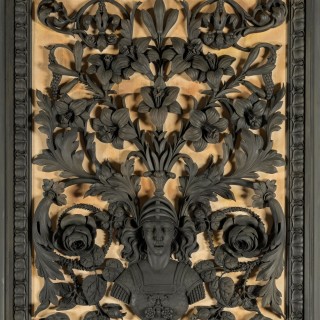 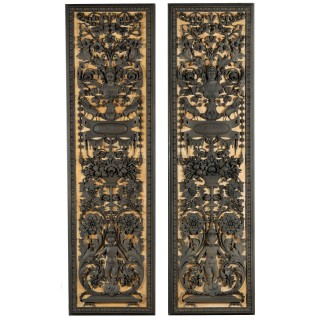 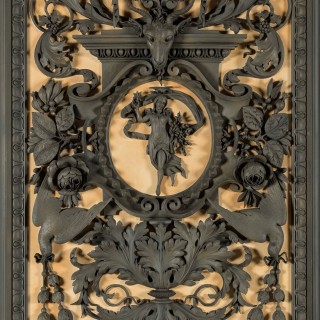 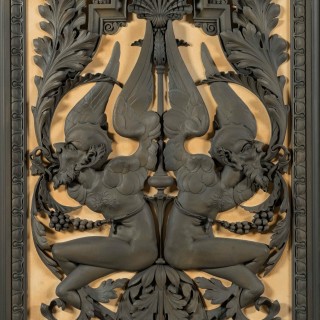 Each panel with applied carving in high relief from American pine, of faultless execution and detail, composed of four pendant pairs, the designs of which survive in the Victoria & Albert Museum. The designs showcased within a patinated carved stiff-leaf border derived from the Temple of Athena Polias, each highly carved panel in sharp contrast to a cream-coloured background. While previously compared with the work of Giuseppe Maria Bonzanigo, contemporary accounts correctly identify the inspiration as Michelangelo’s designs for the ceiling in the Laurentian Library completed under the patronage of the Medici Pope Clement VII (from The Builder, 1863).

The first pair illustrating Ceres within a temple. The Roman Goddess of Harvest presented alongside her wheat sheaf and holding a sickle; surrounded by a plethora of foliate arabesques cascading all around her.

Another pair centred around the dedicatory message to the patron reading “Mæcenati­ Suo / Idibus / Decembris 1864” (To my Generous Patron, on the Ides of December 1864), and another inscription reading “addictissimus” (very dedicated), reflecting the devotion and respect the carver held for Monsignor Witham. Both Latin cartouches equally surrounded by foliate arabesques, flora, fauna, a helmeted maiden, and a crowned angel.

The third pair inspired by the fantastical Flemish grotesque tradition popularised by Cornelis Huys in the fifteenth century. At the centre, a roundel depicting the goddess Nike, also known as the Winged Victory, holding an olive branch and a star, as she vanquishes the malicious creatures surrounding her, including two winged figures below, and a mask in the auricular style at the apex.

The final pair once again a triumph of woodcarving, dominated by a cascading fountain, each ripple and wave delicately hand carved. Two satyrs dancing among fish, snails, and salamanders, happily consuming from the grapevine reflecting a celebratory and bacchanalian theme. The heads above representing the Four Winds as they maintain order over the natural world below.

Anton Leone Bulletti (c.1824-1885) was a Tuscan carver who spent the majority of his working life in England. Initially working in Florence, he was invited by the Duke of Northumberland in 1855 to come to Alnwick Castle and design its decorative furnishings. Rather than shipping the completed carvings from Italy, Bulletti saw an opportunity to create a school focused on Italian carving at Alnwick. With Signor Bulletti at its helm, the carving school and studio was able to teach local craftsmen from London, Newcastle, Sunderland, Edinburgh and Glasgow the intricate style of Italian carving.

The work at Alnwick was incredibly time-consuming, even with a team of British craftsmen at his disposal. Upon completing the work for the Duke of Northumberland in 1860, Bulletti set up a studio in Newcastle where he practised and taught as an artist, designer, gilder, sculptor and woodcarver, until 1878.

One of this first major commissions was in 1863 for the decorative works at Lartington Hall, which are described in greater detail below. Bulletti left Newcastle for London in 1879, where he became chief instructor at the newly founded School of Art Wood-Carving in South Kensington. He retired in 1882.

Built for Francis Appleby in the early 17th century, Lartington Hall was erected on the site of a previous Tudor house. It has the distinction of mostly being passed down the female line, which makes it quite difficult to follow the line of succession. When Frances Appleby died in 1663 he was succeeded by his daughter Margaret who was married to Thomas Mairs of Hardwick Hall. Thomas was responsible for building the Georgian extension to the house in about 1750, moving the main entrance to this new wing, and adding a chapel.

By 1811, the house had passed to Henry Thomas Silvertop, who changed his name to Witham. A keen geologist, he built a museum designed by Ignatius Bonomi on the north corner of the hall to house his collection of fossils, along with his collection of over 3,000 books and paintings

In 1847, Henry’s fourth son and successor, the Rt Rev Monsignor Thomas Witham inherited Lartington. In 1861, he asked Joseph Hansom (of hansom cab fame) to design the porte cochere on the south side of the building as well as an impressive corridor from this entrance to the ballroom (formerly the museum). It is for this grand foyer that Witham commissioned Bulletti to execute wood carvings, which were exhibited in the Central Exchange News Room at Newcastle before being installed in 1864.

Thomas, who enjoyed a busy social life, kept a good wine cellar and was a generous supporter of the village and its school, lived in the hall until his death in 1897, aged 91, when the estate passed to his grandnephew Francis Silvertop of Minsteracres. Death duties forced its sale to a David Magnus Spence, and then in 1918 it was sold again, for £66,580, to Norman Field, heir to an American department store chain, and his wife Olive. By May 1918, the Bulletti carvings are descibred as “taken down” and “leaning against the wall” perhaps suggesting Norman Field has the intention to sell them.

Lartington Hall was turned over to the Red Cross during the second world war, and returned to the Field family afterwards, where his widow lived until her death in 1973.