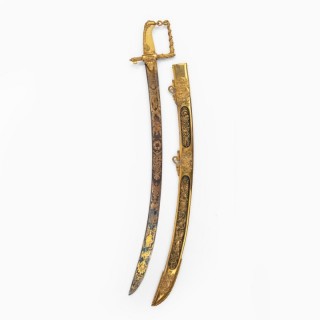 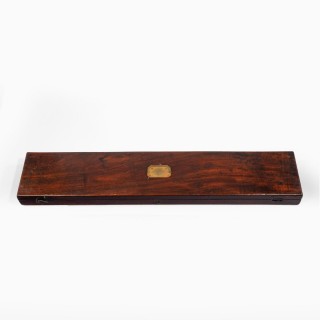 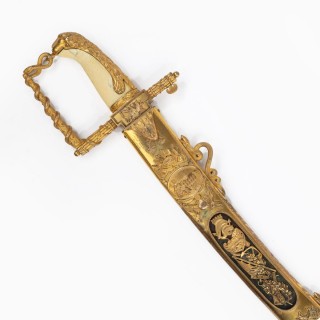 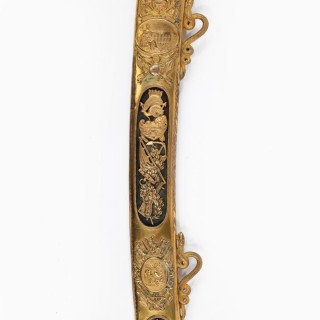 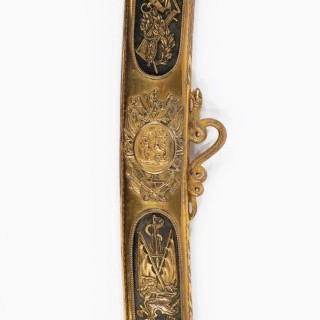 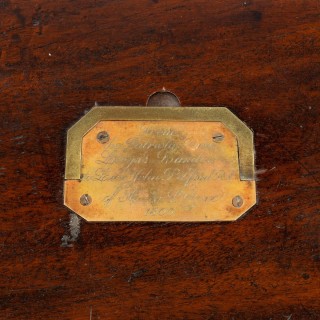 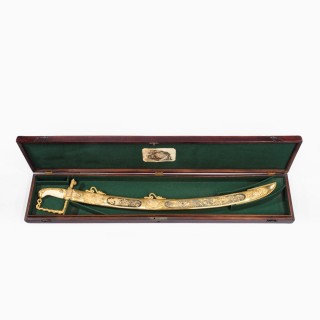 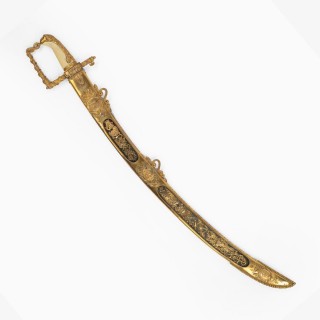 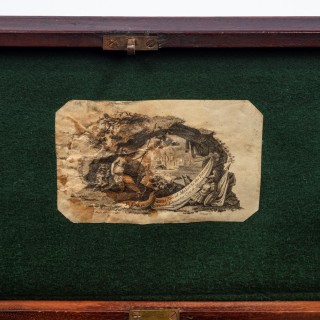 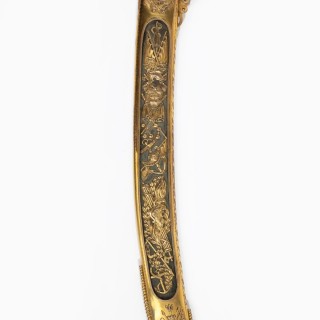 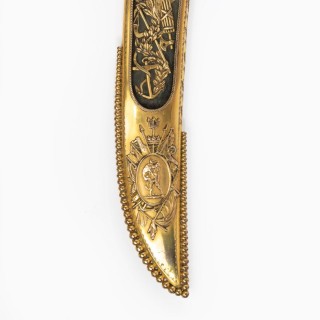 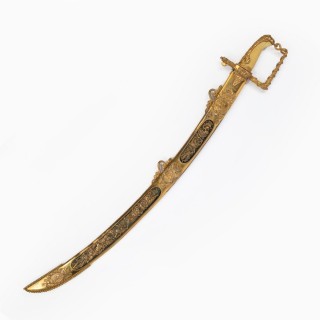 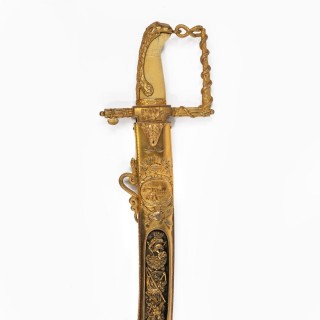 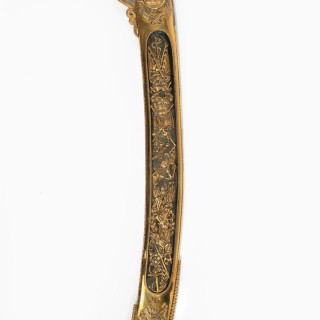 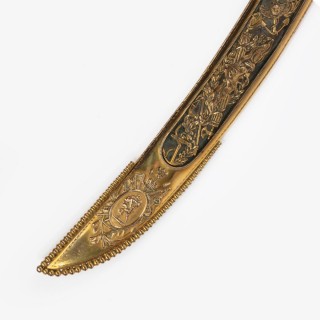 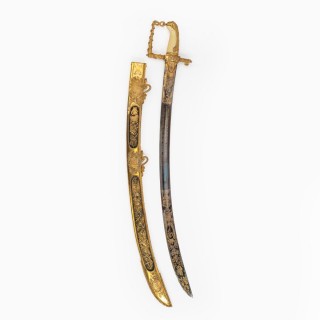 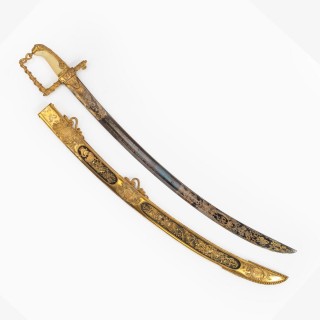 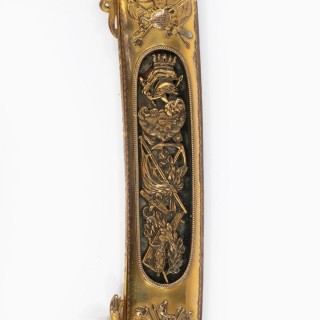 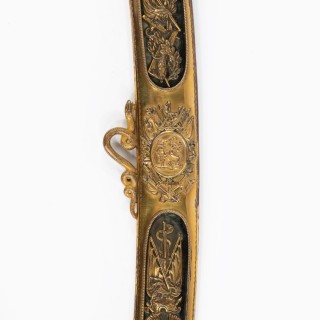 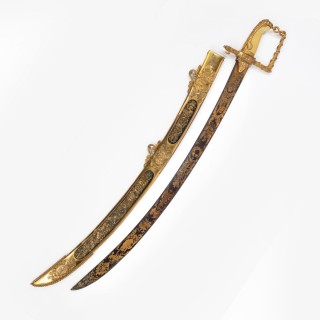 The presentation inscription on this sword reads: “FROM THE PATRIOTIC FUND AT LLYODS TO JOHN PILFORD ESQ CAPTAIN OF HMS AJAX FOR HIS MERITORIUS SERVICES IN CONTRIBUTING TO THE SIGNAL VICTORY OBTAINED OVER THE COMBINED FLEETS OF FRANCE AND SPAIN OFF CAPE TRAFALGAR ON THE 21ST OF OCTOBER 1805”. The curved single-edged blade richly etched and gilt against a blued ground with flowers, foliage, entwined dolphins, naval and martial trophies, figures of Britannia and Victory, crowned arms and cypher of George III, the recipient’s initials in a starburst above a phoenix, and the presentation inscription, stirrup hilt of ormolu, the quillons formed as a fasces, the knuckle-guard as a Hercules club entwined by a snake and retaining its original gilt bullion and blue silk sword-knot, the langets cast with acanthus foliage and naval trophies, the back-piece of the partly chequered ivory grip (minor chip) cast as the skin of the Nemean Lion, in its original foliate engraved scabbard of ormolu decorated with naval medallions on each side cast and chased with the figures of Britannia framed by the inscription ‘Ajax Nelson Trafalgar 21st Octr. 1805’, and Hercules with the Hydra, and the Nemean Lion, the open panels with cast, pierced and chased naval trophies on velvet grounds, the two suspension loops in the form of coiled serpents, the chape with a border of graduated beads, the top edge of the locket engraved ‘R. Teed Sword Cutler Lancaster Court Strand’, in the original mahogany presentation case inset with a brass place plaque, “From the Patriotic Fund Lloyd’s London to Lieut. John Pilford R.N. of HMS Ajax 1805”. A secondary inscription on scabbard throat reads, “Presented to Movis D’Omer Jac Aberle Prop Tivoli Theatre March 1st 1878”.

Footnote: John Pilford joined the Navy at the age of thirteen in 1782. He was promoted through the ranks of the Royal Navy and was distinguished in battle at the “Glorious 1st of June” Naval Battle in 1794 where he was promoted to lieutenant. He served gallantly on his ﬁrst assignment on HMS. Russell where three enemy ships were taken during the battle of Groix, June 23,1795. As a reward he was posted to the 18gun sloop HMS Kingﬁsher capturing prizes off the Spanish and Portuguese coasts. He was instrumental in quelling a mutiny in 1797 and in 1798 he was transferred to the 74-gun HMS Impetueux. He gained notoriety in 1800 when leading a raiding party into the Morebihan River he destroyed a dozen French ships and wrecked port facilities in the river. Pilford met and married during the “Peace of Amiens” but war soon intervened and he was aboard HMS Hindostan by 1803, then HMS Dragon and finally to HMS Ajax, commanded by Capt. William Brown.

Captain Brown was involved in a scandal which resulted in a court martial back in London so Pilford was placed in charge of the Ajax during Nelson’s blockade of Cadiz. Ajax, still under Pilford, was sixth in Nelson’s line at the Battle of Trafalgar on Oct. 21, 1805. Lord Nelson’s 27 ships of the line defeated 33 French & Spanish ships. The Franco-Spanish ﬂeet lost 22 ships, without a single British vessel being lost but Admiral Nelson was mortally wounded. The grateful nation awarded the captain of each British vessel a special Trafalgar edition £100 Lloyd’s Patriotic Fund Sword for Valour. HMS Ajax was the only vessel commanded throughout the battle by a lower ranking ofﬁcer (Lt Pryce Cumby assumed command of HMS Bellerophon after the death of Captain Cooke during the fighting) but was nevertheless given a captain’s £100 sword inscribed

John Pilford never commanded at sea again, with his wealth from prize money in his glorious naval career he spent his time as a gentleman farmer and funding the lifestyle of his nephew Percy Bysshe Shelley, who is regarded among the ﬁnest poets of the English language. Pilford died in 1834 and was buried at St. George’s Church in Plymouth.