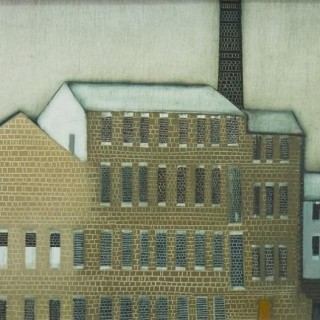 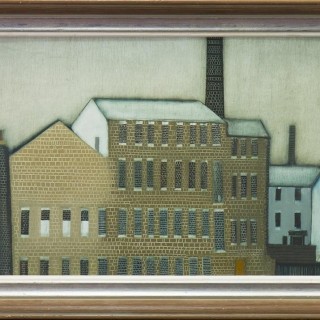 Original Oil painting on board from the Estate of Modern Scottish artist Willie Rodger.
If you’ve been with us on our gallery journey for the last two decades you’ll already know all about this wonderful Scottish painter printmaker. If not then do pop on to our website for the full life story. Although the world lost Willie in 2018, we are still very lucky to have an association with his family and are able to offer works from his estate from time to time. This is not from that source but nevertheless is a fine example of Willie’s painting. He was a warm and humorous soul whose personality poured onto the page or canvas. Even without a comical figure to point us to a punchline this little study of industrial buildings still manages to exude his humour, apparently anthropomorphic architecture is a thing.
Available at Panter and Hall.

Born in Kirkintilloch, Willie won a place at Glasgow School of Art where he studied in the commercial art department from 1948 until
1953. The School’s head Douglas Percy Bliss was an early proponent of Edward Bawden’s work and the young Willie became an
enthusiastic disciple. From the beginning he chose relief printing – wood and lino cuts – as his principal medium, rising to become the
recognised master of his craft in Scotland over the ensuing decades.
He exhibited widely and regularly in the 1950s and 60s and was a member of the Glasgow Group alongside Ian McCulloch, Jack Knox
and James Morrison in the 1970s. As with many artists of his generation he entered art education, spending two decades as principal
teacher of art at Clydebank High School until his retirement in 1987.
He continued to practice throughout his teaching career, enjoying many high-profile public commissions throughout the 1970s. In 1971he
was awarded a Scottish Arts Council residency at Sussex University and in 1974 he was commissioned by Angus Ogilvy of theStirling
Gallery to produce a set of Scottish Historical Playing Cards to much acclaim. In 1978 Ruari Maclean, in his role as typographicadviser to
HMSO, commissioned Willie to design an unissued set of Scottish devolution stamps and a year later a pictorial aerogramme
commemorating the Open at St Andrews. During the years leading up to Glasgow’s tenure as European City of Culture in 1990, Willie
benefited from the patronage of Tessa Jackson, then head of Visual Arts & Architecture for the event. Through her, Willie was
commissioned to make a 100ft mural for Scotrail’s Exhibition Centre Station depicting Clydeside landmarks that still stands today.
He was a successful commercial graphic artist and stain glass designer, collaborating with the glass painter John K Clark on sets of
windows in the parish churches of Kippen, St Mary’s Kirkintilloch and Milton of Campsie. Of the many book jackets featuring his work
perhaps the best known are the 1983 edition of Monica Clough’s ‘Field of Thistles’ and more recently Liz Lochhead’s ‘The Colour of
Black and White’ in 2003. Lochhead, a former Scots Makar, formed a strong personal bond with Willie and included two poems inspired
by him and his work in her 2016 collection ‘Fugitive Colours’. She went on to describe his paintings as ‘deep saturations of pure colour’.
Never an artist to be restricted by medium, his linocuts have been interpreted by the Dovecot Studios in both gun-tufted rug and tapestry.
He was the first artist to be elected an associate of the Royal Scottish Academy under the new category of printmaker in 1987, and elected
full academician in 2005 when the associate rank was discontinued. In 1999 the University of Stirling bestowed an honorary doctorate for
services to art in Scotland.
His work is held in the collection of the V & A, the Fleming Collection and the University of Stirling Art Gallery. Thanks to a grant from
the National Fund for Acquisitions the Lillie Art Gallery added sixty of Willie’s lino cuts to their permanent collection in 2017. A
retrospective exhibition was held in the Auld Kirk Museum, in his home town of Kirkintilloch, in 2005 to mark his 75th year.
Martin Hopkinson, the former Keeper of Prints at the University of Glasgow’s Hunterian Art Gallery, on learning of Rodger’s deathwrote
“his art was transformative for Scottish printmaking”.