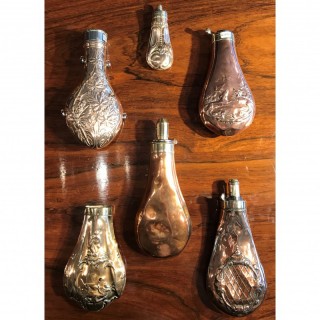 This collection of six English 19th Century Copper and Brass Military Power Flasks contains examples by a variety of different makers including one by Sykes, with the makers stamp ‘Sykes’ stamped on the nozzle and ‘Sykes Patent’ on the nozzle flange . One flask with fine embossed decoration featuring pendant game birds among oak leaves and acorns, with intricate embossed vine leaves and clusters of grapes to the rear, is a known model made by George and John William Hawksley, Sheffield. The smallest powder flask is a known model made by James Dixon & Sons. A wonderfully decorative collection of military history from the personal collection of the late Nicholas Parsons CBE.

Sadly Nicholas Parsons CBE passed away last year and many will have heard the accolades afforded him and his glittering career over so many years from stage, radio and television performances. WR Harvey Antiques have been asked to find homes for a number of pieces from his estate which his family don’t have space for.

Many years ago one of the regular visitors to Harvey’s Antiques of Chalk Farm in London was an aspiring actor/comedian, Nicholas Parsons, who lived in Hampstead. He and my Father (WR Harvey) shared more than just an appreciation of English Antique Furniture and Clocks as they both drove the same model of car, an Alvis TE 21 the servicing of which was carried out by Tollerton and Burke underneath the railway arches in Chalk Farm.

They often met there and strolled back to the shop for a cup of tea which is where David Harvey first met Nicholas. This friendship endured when he later moved to Oxfordshire followed by David’s move to Witney.

Good – Some losses, splits and wear commensurate with age and use. Further item imagery and condition reports available on request.