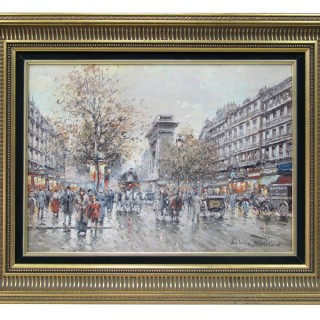 Antoine Blanchard 1910-1988
Antoine Blanchard was born in the Loire region and displayed early artistic talent. He studied at the Ecole des Beaux-Arts in Paris where won the prestigious Prix de Rome. He had a great passion for the city of Paris which was encouraged by his father and grandfather. His career was devoted to painting Paris scenes as he remembered them from his childhood and youth. His style is extremely recognisable and his execution very meticulous. It was his usual practice to incorporate a notable Parisian landmark win his work with horse drawn carriages and people of fashion. This excellent and characteristic composition is entitled ‘Le petit Arc de Triomphe” (near one of the eight old gates of Paris). Signed lower right.

There is a Catalogue Raisonnee devoted to the artist (now out of print).
There are numerous references to this famous artist in the Art literature and on the internet.

All subject to changes in the current health crisis.