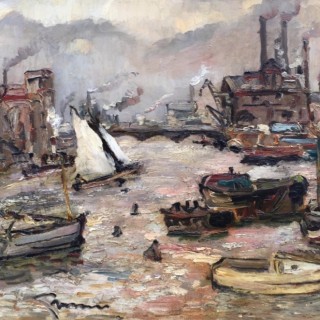 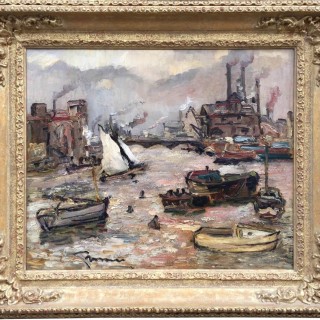 Original oil painting by Stanley Grimm ROI RP (1891-1996) Although born in London, Stanley Grimm was whisked back to Russia by his family to be educated first at Riga and then Munich. He was immersed in the art world of Berlin in the years immediately before the Great War and absorbed the excitement of the Blaue Reiter group of Kandinsky and Franz Marc. He eventually made his way back to London after a period being conscripted by the Bolsheviks to paint propa ganda posters in Russia. This is a typical view of London as it was in the middle of the last century. Still a very industrial city, the river thronged with commercial traffic and the skies blackened with burnt fossil fuels. This I’m guessing will find its way onto the walls of one of those very smart new developments rising from the ruins of that once vital power station in Lots Road.