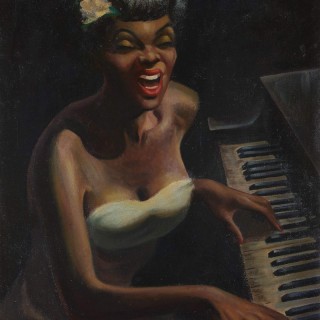 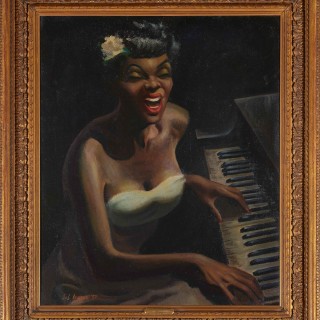 Original Oil on canvas by Solomon ‘Sol’ Levenson (1910-2006)
Now this is something else, utterly joyous and if it’s possible to paint sound into a picture then this is about as loud as it gets. During the Great Depression Levenson had joined the federal Works Progress Administration. Set up as part of FDR’s New Deal it employed hundreds of artists nationwide and Levenson was put to work painting murals of American history. On his death in 2006 it was thought he was the last surviving WPA artist. Although not from his WPA period this is a relatively early work and its appeal and ultimately its value is derived entirely from the subject. The Blues had an enormous influence on popular music in 1950s America and ‘Torch singers’ – the likes of Ella Fitzgerald, Billie Holliday and Sarah Vaughan – were at the height of their fame. I’m not sure if this is a portrait from life or Levenson’s imagined ideal, either way it is a wonderful evocation of a musical moment in American history. We had fun framing this stunning chanteuse and settled on an extremely grand eighteenth century portrait frame that used to house a Gainsborough. We’ve kept the little Gainsborough name tablet just to confuse people.
Available at Panter and Hall.