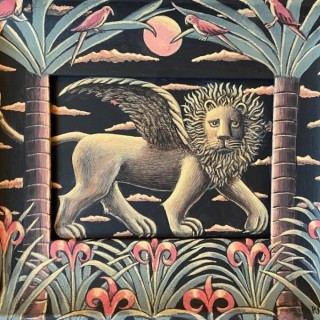 PJ lives and works in Gloucestershire and is an artist of international repute, having dealers in Paris, Canada and New York as well as London. We regularly hold highly successful solo exhibitions of PJ’s work and her renown stretches abroad where this summer the Morohashi Museum of Modern Art in Japan held an exhibition of her work drawn from their own large collection and paintings borrowed from the studio and private British collections, which had three million visitors. Also through the summer the Museum of Gloucester showed thirty of PJ’s paintings paired with thirty paintings from their historic collection, an exhibition that broke attendance records.

PJ’s paintings combine a highly distinctive style with extraordinary technical mastery. Rather than painting from photographs or direct observation, PJ prefers to draw from a combination of remembered observation and imagination, resulting in an intuitive and resolved composition. Few contemporary artists are more accomplished at depicting perspective or depth of field, and the viewer has a sense of being invited into each painting, encouraged by the inclusion of the frame in the picture surface.

PJ has received numerous awards including an honorary doctorate of art in 2010 and MBE for services to art in 2011.