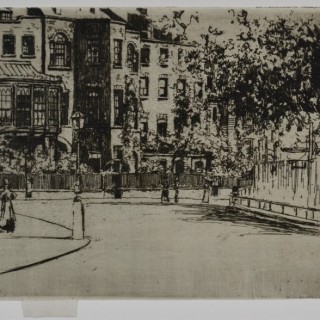 The Corner of Cheyne Walk, Chelsea

Battersea from Chelsea was executed c.1888-9 in a total of about 30 impressions. It was probably drawn from the Greaves boatyard at Lindsay Wharf. The subject is the corner of Beaufort Street and Cheyne Walk, seen from the Chelsea End of Battersea Bridge. The Georgian house, with a veranda on the second floor if Belle Vue Lodge, next to it is Belle Vue House and to the right of that is Lindsey Lodge. Examples are in the collections of the Rijksmuseum, Amsterdam; British Museum, London and National Gallery of Art, Washington.