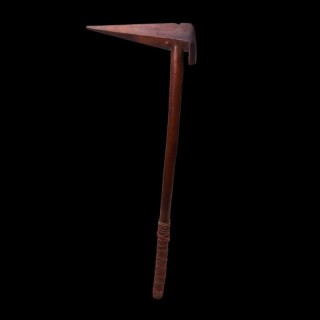 ‘The distinctively shaped porowa ra maru, or “bird head,” clubs of New Caledonia were prestigious objects created for use by chiefs. The clubs symbolized wealth and high rank, and on some occasions served as gifts during ceremonial exchanges.

The heads of the clubs are carved in the form of stylized bird heads typically distinguished, as here, by long, pointed beaks. However, as none of New Caledonia’s indigenous birds has a similar beak, some scholars have suggested that the image instead represents the head of a sea turtle with its projecting, beaklike mouth. The thin, delicate tips of the beaks are extremely fragile and would have broken easily if the clubs were used in combat. Hence, it seems probable that they were primarily ceremonial objects.’