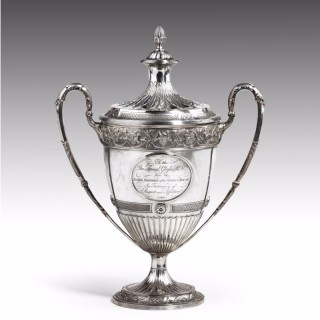 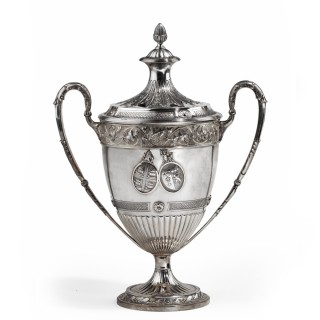 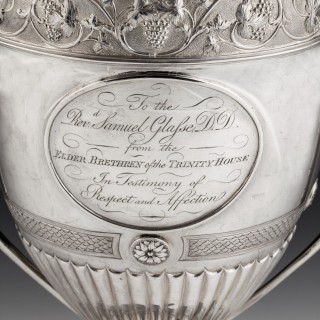 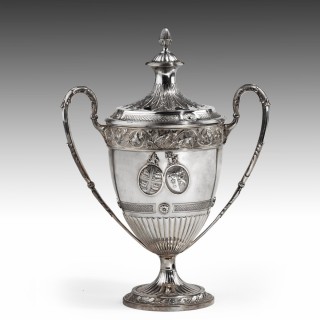 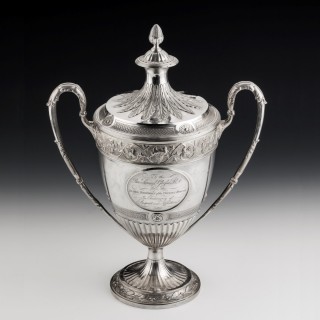 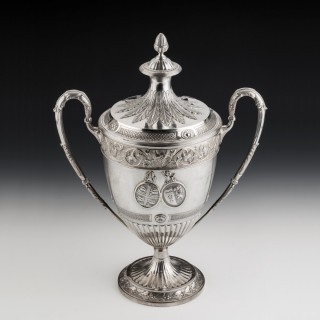 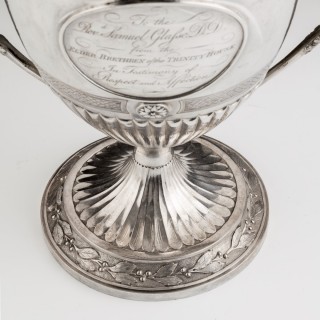 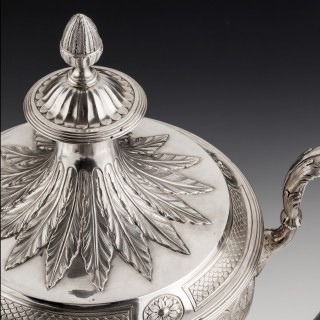 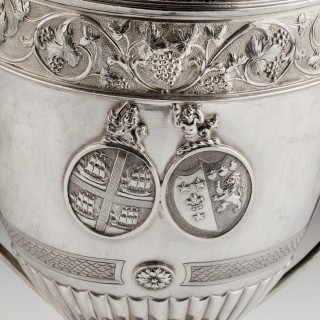 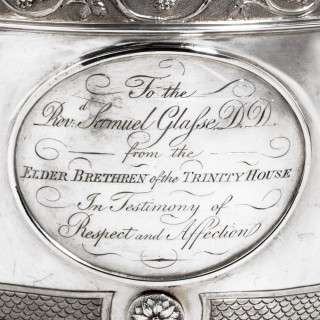 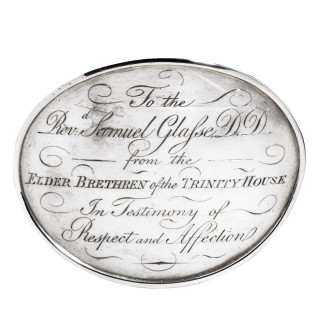 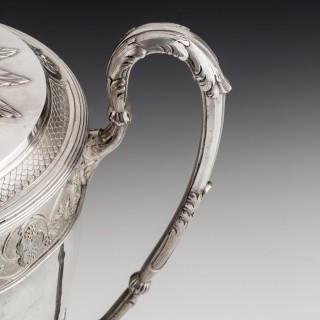 This cup is modelled in the classical style with a fluted foot chased with a band of laurel leaves supporting the fluted lower body decorated with a band of fish scale decoration intersected by four foliate bosses. The plain central field is inscribed on one side ‘To the Revd. Samuel Glasse, D.D. from the Elder Brethren of the Trinity House, In Testimony of Respect and Affection’, and on the other with the conjoined arms of Trinity House and the Glasse family. The rim has a band of vine leaves and bunches of grapes on a matted ground, with acanthus and guilloche-chased handles. The domed cover is cast and chased with acanthus leaves, the rim with repeated fish scale and boss decoration, and the finial cast as a stylised acorn. Maker’s mark: W.H. for William Hall, London 1795.
Rev. Dr. Samuel Glasse, D.D., F.R.S. (1735-1812) was Chaplain to Trinity House and Chaplain in Ordinary to George III from 1772. Regarded as one of the best
scholars of Westminster School and of Christ Church, Oxford, his congregations ranged from prison inmates to George III and the royal family on their annual sojourns at Weymouth. He ‘was a very popular Preacher’ whose sermons were often published as he ‘frequently employed his talents and eloquence in exciting to charity the congregations of the Metropolis and its vicinity.’ He was an active supporter of the Marine Society and the Royal Humane Society, a fellow of the Royal Society and a prebendary of Wells and St Paul’s Cathedrals. In a sermon delivered to the Seafarer’s Charity in 1778 he told supporters that through their efforts some 1182 ‘poor boys’ had been ‘clothed and sent to sea in his Majesty’s Ships, and also in the Merchants Service’. Such candidates included those sent by the magistrates of the London and Westminster courts, orphans ‘found lurking about the Streets’, failed apprentices and vagabonds ‘overwhelmed with Filthiness, and in danger of Perishing thro’ Cold and Hunger, Nakedness and Disease’.
Height: 16 1⁄2 in (42cm) Width: approx. 12in (31cm)