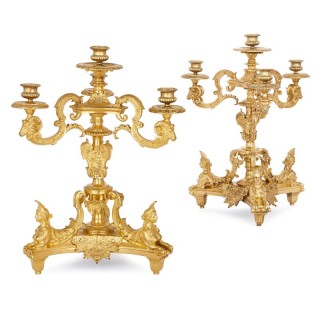 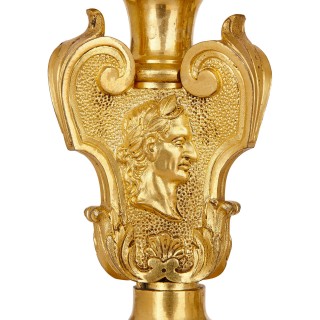 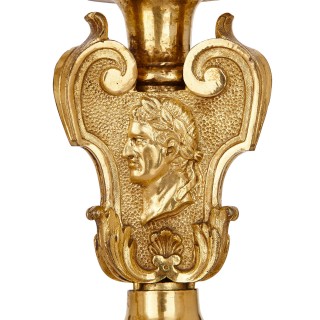 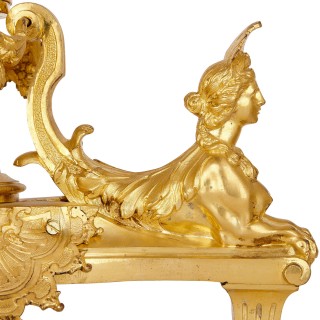 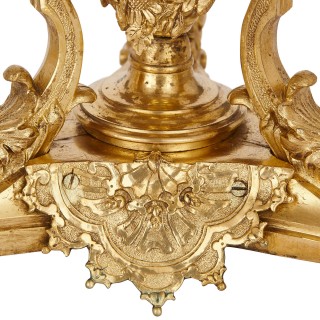 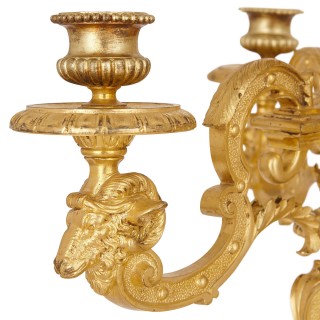 These gilt bronze girandoles (ornamental branched supports for candles or other lights) were made in France in the late 19th Century. They have been designed after a famous pair of Louis XIV style girandoles, created by the French master craftsman, Andre-Charles-Boulle (1642-1732). Boulle based the girandoles on a design by Jean Berain, a contemporary designer in 17th (and early 18th) Century Paris, who was popular with the French court.

The girandoles stand on three fluted feet, which support triangular-shaped bases. Three sphinxes, wearing foliate crowns, rest on the projecting parts of each base, their tails forming scrolls that support the sides of the stems. The stems are shaped to the centre and decorated with classical male profile portraits. Above, the stems support triangular-shaped tops, which act as platforms for the girandole arms to spring from. Three scrolling strapwork arms, with foliate flicks, extend out from this base, terminating in rams’ heads, topped by the candle-holders. These consist of egg-and-dart moulded drip-pans and urn-shaped capitals. A fourth holder — which is similarly designed, but with a wider drip-pan featuring a foliate underside — surmounts the triangular-shaped platform to the centre.

These girandoles will look beautiful once fitted with candles, since the flickering light they produce will catch on and reflect off their shining gilt bronze surfaces.

after the model by andré-charles boulle