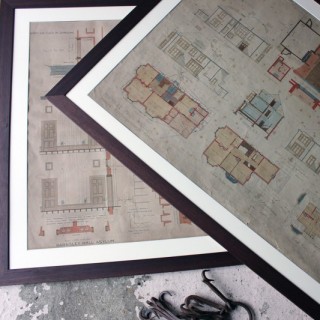 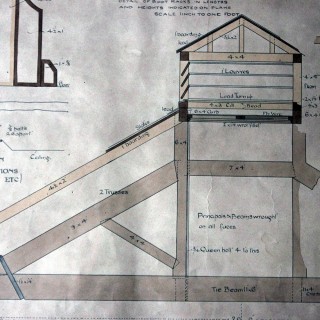 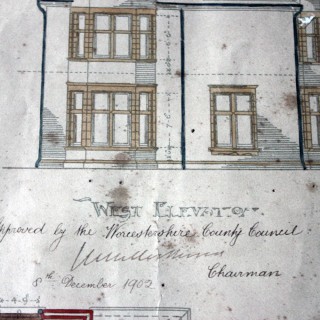 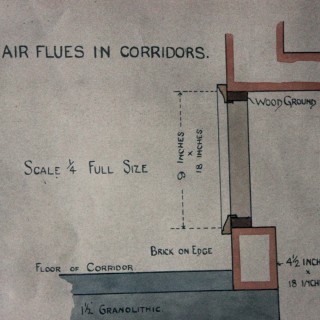 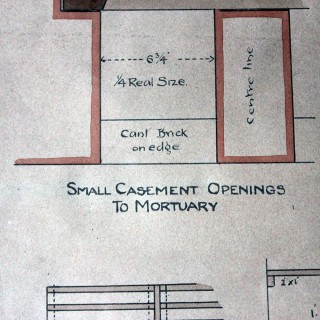 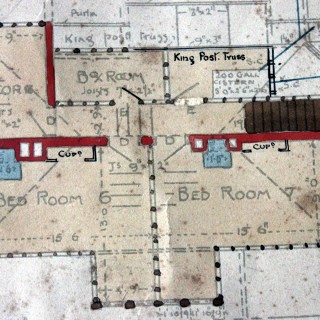 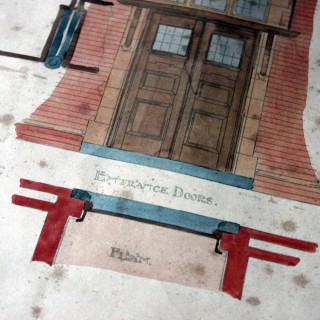 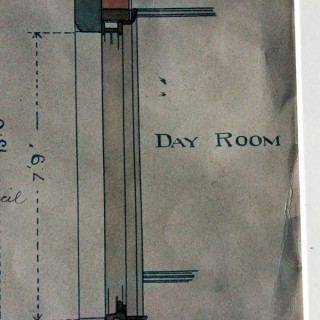 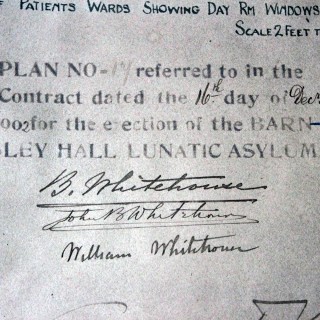 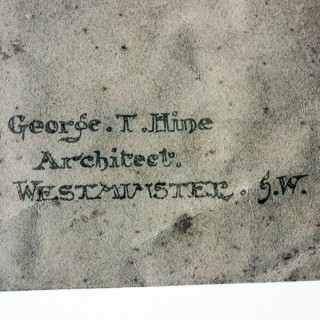 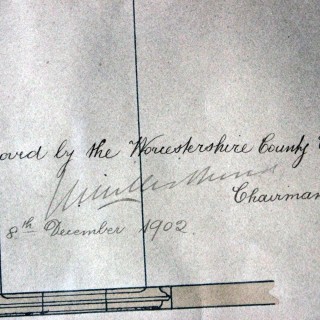 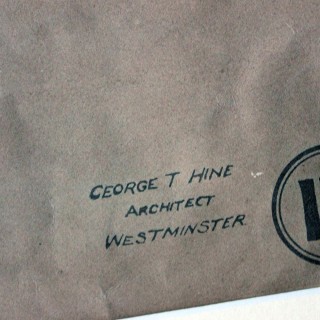 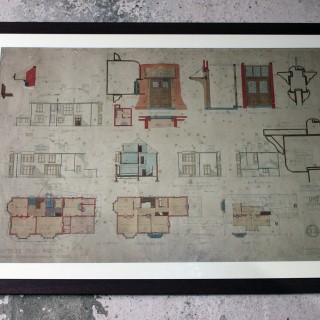 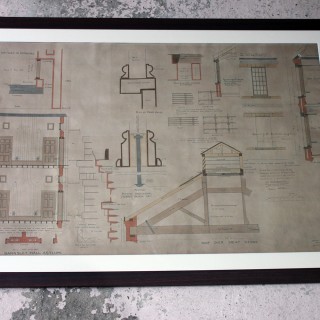 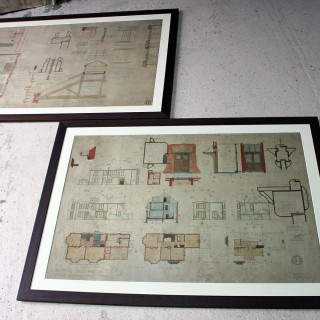 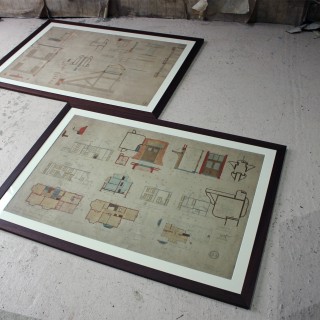 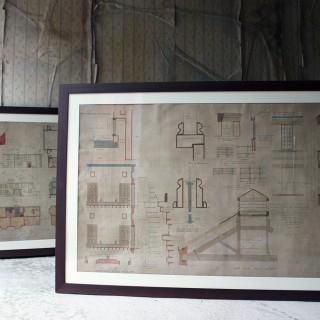 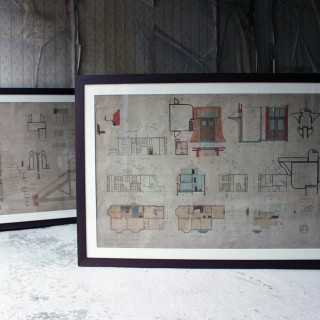 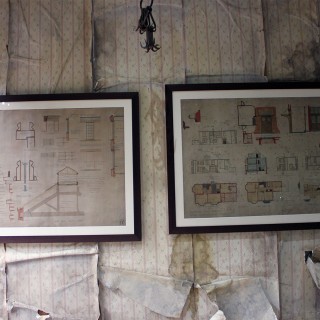 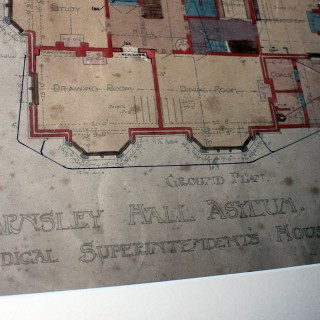 The large and scarce architects site plans, framed and glazed, for Barnsley Hall Asylum, by George T. Hine Architect, both “Approved” by Worcester County Council in 1902, showing the Medical Superintendents House and the other cross sections of various parts of the main asylum, with an array of interesting annotations, each surviving from the early Edwardian period.

The construction of asylums was widespread in Britain following The Lunacy Act of 1845, which resulted primarily from the work of John Connolly and Lord Shaftsbury. This act professionalised the asylum, and ensured that each institution was mediated by the local authority. It marked a paradigmatic shift, wherein ‘lunatics’ began to be considered as patients instead of prisoners.

Barnsley Hall Asylum (later known as Barnsley Hall Hospital) was opened in 1907 to take patients from the overcrowded Powick Hospital, near Malvern. Records show that as early as December 1898, a ‘Lunatic Asylum Special Committee’ had been set up to investigate the possibility of building a new asylum in Worcestershire, and ‘to make inquiries on the subject of the employment of skilled assistance, and of an Architect specially versed in the construction of public Lunatic Asylums, and also to take steps to secure the option to purchase a number of suitable sites for the proposed new Asylum.’

By September of that year, an eminent London architect specialising in asylums, George T. Hine, had been chosen, and these plans for the new Asylum were well underway. It was to be of the ‘compact arrow’ layout, as the ground floor plan shows. Based on the Claybury Asylum in Essex, also designed by Hine, it was a popular design which became for a while the standard for asylums. The design of asylum buildings, allowing patients privacy and space as well as opportunities for recreation and socialising, were considered to be an intrinsic part of their treatment.

In the 1907 ‘Report of the Commissioners in Lunacy’, the writers say that they are:
…well pleased with what we have seen. In our judgment the Asylum is well planned and constructed and provides excellent accommodation for the care and treatment of the insane.

Barnsley Hall was to house 256 male patients and 320 female patients, and when it opened in 1907 it took 200 ‘pauper’ patients from Powick, reserving 250 beds for paying patients. It employed 11 male and 9 female attendants, 3 kitchen servants, 4 artisans and 2 laundresses. When it opened, it began with 41 male and 67 female patients. The asylum was opened by the Countess of Coventry on June 27th 1907.

The ‘County Asylums’ website describes the buildings at Barnsley Hall:

George Hine’s design consisted of equal provision for Men and Women in three blocks on either side of the Recreation Hall which occupied the centre of the south front. Located behind this were Kitchens, Stores and the Administrative Block. The Engineering Department, Water Tower and Boiler House were located to the west, alongside the Male wards, with Laundry, Sewing Room and Nurses Block to the East. The Buildings were constructed from red brick with terracotta faience detailing on the principal buildings and Water Tower. The Administrative Block displays the county crest and bears a louvred cupola. Ward blocks bore strong resemblence to other Hine asylums with multiple paned sash windows and banding from courses of lintels, almost identical in style to Netherne (Surrey CC 1909). Airing Courts contained typical octagonal wooden shelters.

The record books give us some indication of the diagnosis and treatment of patients, as well as their day to day lives:

Every case upon admission is subjected to an examination of the physical state as thorough as that in vogue at the hospitals attached to the large Medical Schools, and, in addition, an exhaustive enquiry is made into the mental condition.

Patients were required to stay in bed for one week at least after admission, being closely monitored, for both the medical and ‘moral’ benefit of the patients. Later, male patients worked on the farm, ‘stores, bakery and workshops’ while women worked ‘in the kitchen and laundry’ and making things in the needle-room. In the 1910 Medical Superintendent’s Report, the doctor was keen to emphasise that the asylum treated patients for bodily as well as mental disorders.

In addition to work and treatments, there were also entertainments to be had; Barnsley Hall was considered to have the finest ballroom in Worcestershire, and weekly dances and ‘weekly smoking concerts for male patients’ were held. Services in the chapel were well-attended, with a choir formed of nursing staff. The asylum organised a staff ball, which was very popular, and football and cricket matches for staff and patients alike. There was an annual Carnival, and many ward entertainments. The Lunacy Commissioners’ Report for 1908 comments on the availability of books for patients and the billiard tables, as well as commending the hospital for being ‘clean and fresh’ with good food. The report adds that though many patients express a desire to be discharged, there were few complaints. Later Reports also commend the food, which, like the grounds, was seen as crucial to the patients’ well-being.

Hugely interesting and important pieces of social history and possibly the only surviving examples of their type.

There is some expected light discoloration to the page edges in places but largely the wholes remain in-tact so this only serves in adding some more character. There are fold creases and spotting as photographed. The frames are contemporary and effective.