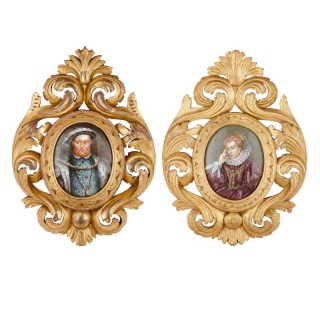 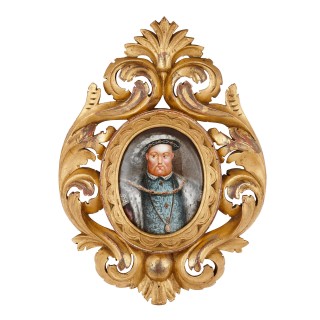 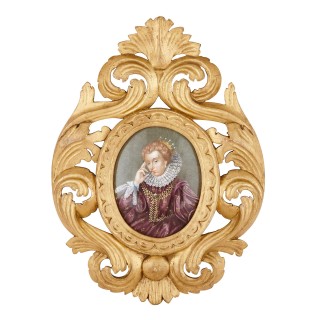 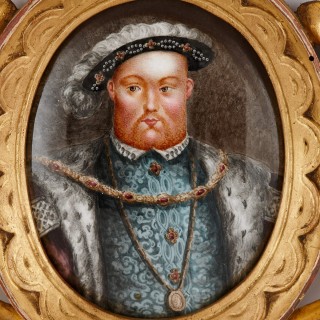 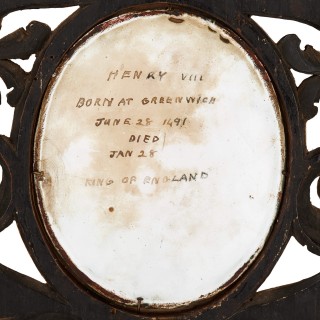 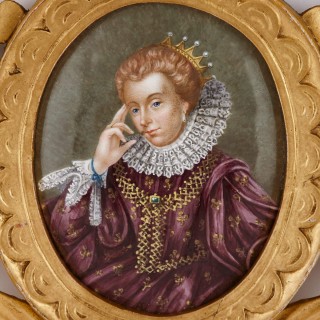 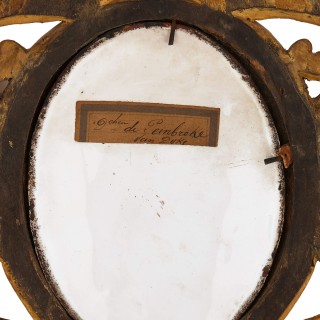 These exquisite portrait plaques were made in the French town of Limoges, which is renowned for the fine quality of its enamel wares. The panels have been painted with oval, half-length portraits of British Tudor monarchs, set within elaborate giltwood frames.

The portrait of Henry VIII has been painted after a famous 16th Century portrait of the king by Hans Holbein the Younger. Holbein was a German painter, draftsman and designer, who worked in in the English court when Henry VIII was king. He was widely celebrated for the precision of his drawing and striking veracity of his portraits. In this work, Henry VIII wears a light blue doublet, with a small white ruff, a fur-lined coat, two heavy gold necklaces and a floppy black hat with a white plume.

Accompanying this portrait is a similarly formatted and framed plaque, depicting a queen, and possibly one of the six wives of Henry VIII. The woman wears a luxurious Tudor style purple gown, which is embroidered with gold fleur-de-lis, and upon which rests a large, latticed gold necklace, with a green jewel at the centre. The woman wears a fine crown on her head, and large lace ruff around her neck. She holds her right hand up to her face, drawing attention to blue ribbon tied around her wrist and a ring on the fourth finger of her right hand — possibly a love token, or a betrothal, or wedding ring, although one would expect this to be placed on the woman’s left hand. It is possible the queen depicted is Jane Seymour, who is shown in portraits to have similar features, including blonde hair and blue eyes.

Indeed, Holbein’s portrait of Henry VIII — which has been faithfully copied here — was painted in 1536-7 to commemorate the king’s marriage to Jane Seymour. The portrait was one of several within a larger mural scheme, which also depicted Henry VIII’s parents, Henry VII and Elizabeth of York, and, importantly, Jane Seymour.

The back of the portrait of the king is signed, ‘Henry VIII / BORN AT GREENWICH / JUNE 28 1491 / DIED / JAN 28 / KING OF ENGLAND’, while the inscription to the second work is only partially legible, reading ‘_ du Pembroke / Van Dyke’. This is likely a later, incorrect attempt to identify the sitter and artist, since Anthony van Dyck was not active in the Tudor period, and did not work in this style.