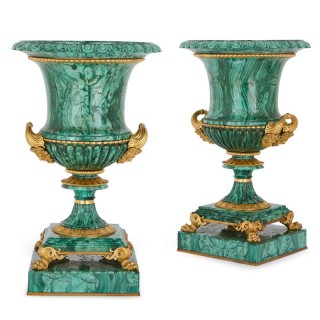 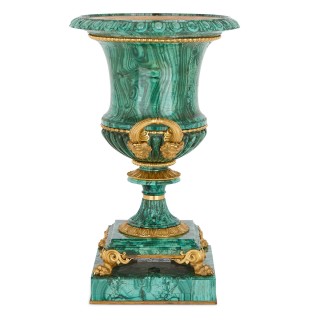 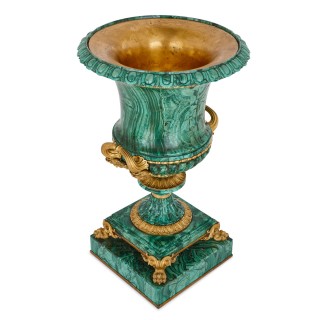 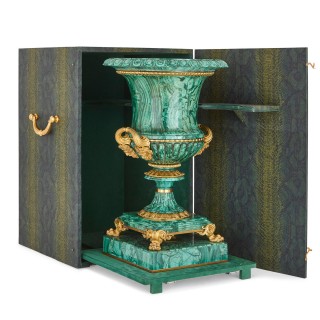 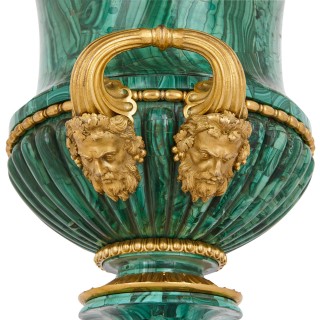 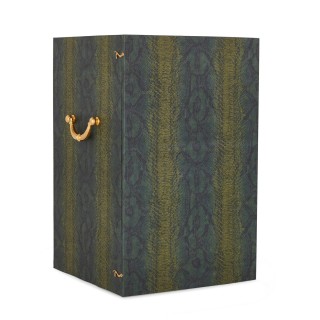 These magnificent gilt bronze (ormolu) mounted malachite urns were created in c.1830 to a design by Ivan Ivanovich Galberg (Russian, 1782-1863). Galberg was an important figure, who served as the architect of the Imperial Russian court from 1817, and the Professor of the Academy of Fine Arts in St. Petersburg in 1842. Galberg worked at the prestigious Ekaterinburg Imperial Lapidary Factory, where he designed several beautiful hardstone urns, vases and tazze. These urns are similar to a pair in The State Hermitage Museum’s collection in St. Petersburg (inventory numbers: ERP-2641 and 2642) and to another, made four years earlier (in 1826), which is illustrated in Semyonov, V.B. Malachite, Sverdlovsk, 1987, Book 1, p. 139, ill. 22.

The malachite urns are of Campana form. They feature bell-shaped bodies with flared mouths, which are decorated with egg-and-dart carvings and ormolu bands. The urns’ lower bodies are gadrooned, and they are mounted with ormolu bead-and-reel bands. Each vase features two small ormolu handles, decorated with classical male bearded masks. The urns are supported on waisted stems, banded with ormolu ovolo and foliate patterns. Each item stands on a stepped square plinth, set on four ormolu scrolled paw feet. These are placed on square bases, with ormolu undersides. The urns are stored within specially designed boxes, which are fitted with gilt bronze handles.

The urns reflect the fashion for malachite in Russia in the 19th Century. The various stone deposits in Russia – namely in Altai and the Ural Mountains – made malachite readily available for the country’s craftsmen. It was a point of national pride to be the producer of such a beautiful stone, with its bright green colour and dark concentric veins. Russia used the international art shows of the 19th Century, such as the Great Exhibition in London in 1850, to showcase grand pieces of malachite decorative art and furniture.