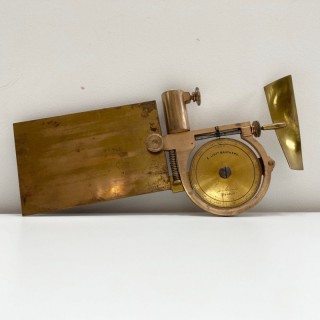 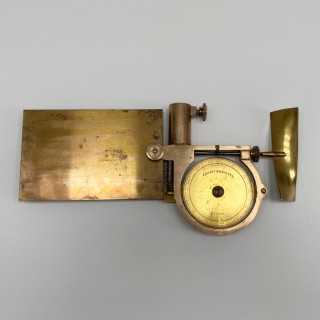 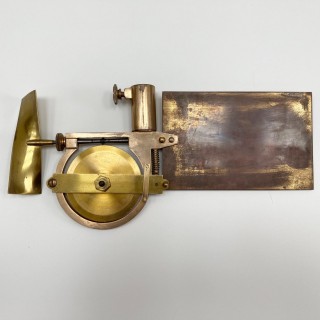 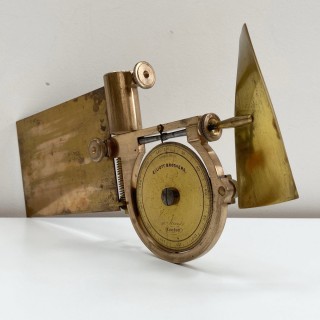 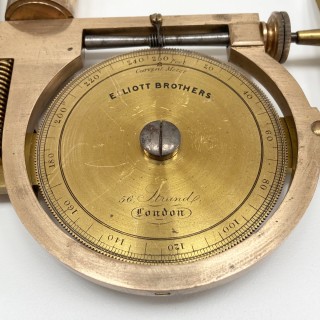 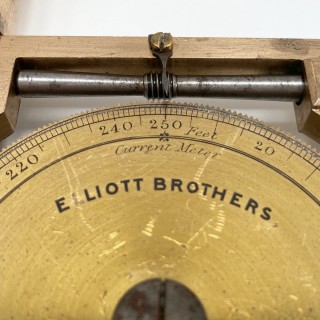 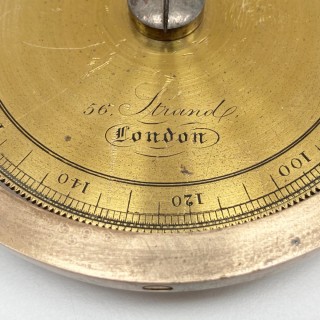 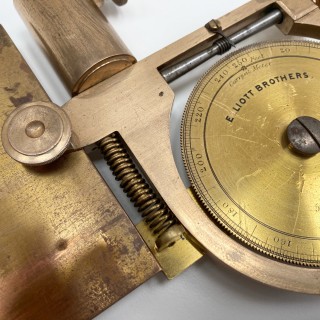 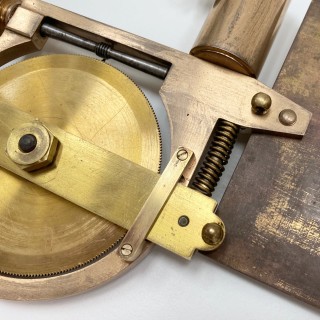 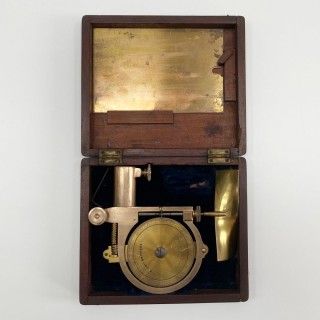 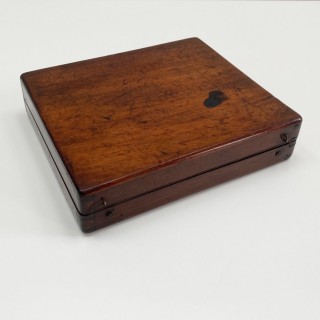 Designed originally in 1836, this rare instrument designed by the famous American scientist Joseph Saxton made one of its first appearances featuring in The Magazine of Popular Science & Journal of the Useful Arts with the following description:

“The necessity of accurately ascertaining the velocity of rivers etc, in the numerous cases where the rate of the current, the total volume of the passing water etc are required to be known, has made it extremely desirable to have a convenient means of measuring and comparing these velocities, that may be applied in every case likely to occur.

Instruments for this purpose have been designed and described by Eytelwein, Wattman, Fontaine and others; but it is believed that no one of them has so well satisfied the conditions which have been latterly supposed to be necessary in this kind of instrument, as that which is the subject of this communication. This meter has been in the hands of several eminent hydraulic engineer, both English and Foreign, for the last two years, and has been employed successfully by some of them in investigations of great importance; in that for example of estimating the sources from which it has been lately proposed to supply the metropolis with wholesome water, its use was extremely serviceable.

Among the conditions which it seems desirable that an instrument intended for such purposes should possess, the following appear important: Facility of use under all possible circumstances; portability; fewness of parts; strength and simplicity of construction, so as not to be easily deranged or broken, and in the case of accident very soon put to rights or repaired. It is indispensable that it have also means of registering the rate of current at any point, during the whole of any given period; and this, when from immersion, or other reasons, the actual observation of the instrument is inconvenient or impossible.

These conditions at least, are satisfied in Mr Saxton’s meter; and by it, the velocity of a current at any part of the surface or bottom of a river, and in all lines between them, can be easily and accurately ascertained; and of course when observations have been made in a sufficient number of lines, the mean velocity of the whole river etc, at the place of observation, may be obtained. This, if multiplied by the sectional area of the river, would give the total volume of water passing during time of time of observation. In cases where great accuracy is required, or the rate of flowing is variable, any number of instruments may be simultaneously deployed.”

As further described, the Saxton’s water current meter consists of a revolving vane, a register, a tail and a staff for holding the instrument underwater at the required depth. The instrument could of course be adjusted along the staff for this purpose. At the dial, there is an adjustable spring and screw mechanism that allows the operator at the surface to engage the dial against the vane screw by means of a piece of string. The string is pulled taught at the start of the measurement period and released at a given time. The release of the string disengages the dial from the vane screw and therefore ceases the measurement period. By means of this system, the operator can measure a precise and accurate flow which can be replicated at various points in the water course or at various points in time at the same position.

The inventor of this useful device, Joseph Saxton was an American inventor, watchmaker and early photographer from Pennsylvania. He was first employed as a watchmaker in 1817 and quickly proved his intellect by inventing a machine for cutting the teeth on chronometer wheels and was responsible for the clock at the rebuilt steeple of the Independence Hall.

He spent nine years from 1828 in England in order to continue his studies during which he invented a magno-electric machine, a device for measuring the height of water in steam boilers, a riflescope, a fountain pen prototype and also devised the plans for the water current meter.

After this furtive period, Saxton returned to the US and took a position at the Philadelphia Mint and oversaw weights and measures but he is perhaps most well known for his interest in early photography, his daguerreotype image of the Central High School is considered to be the oldest photograph taken in US history.

This instrument is certainly not as old as Saxton’s initial invention but it follows a similar form and one which was replicated and improved upon within the UK throughout the nineteenth century. Prestigious makers such as Patrick Adie, JJ Hicks and Casella and of course Elliott Brothers are all known to have sold examples.

Elliott Brothers, began in the early nineteenth century and was formed in 1804 by the founder William Elliott. Following the completion of his apprenticeship to instrument maker, William Blackwell, he began trading under his own name, W. Elliott and plied a successful trade in London. Elliott is considered to have been married three times during his life and early records suggest a number of makers with the same surname working in London at this time. Evidence is not yet complete to confirm just how many of these characters were related but records suggest that William’s son Charles Alfred from his third marriage was apprenticed to him by 1837. William must have been a man of means by this point as his elder son, Frederick Henry had graduated from Christ’s College in Cambridge by 1845.

Four years later in 1849, William took both of his sons into business, changing the name to William Elliott & Sons and in the following year exhibited at The Great Exhibition where they were a recipient of a bronze medal for their work. By this time, the company had moved from their original base in High Holborn to a new address at 56 The Strand.

William died in 1853 leaving the business to his sons and by 1854, the pair had changed the name to Elliott Brothers. In 1857 the company subsumed the highly renowned instrument making company, Watkins & Hill after the deaths of the partners. The Watkins & Hill Charing Cross premises were then leased and Elliott Brothers moved to larger premises at 449 Strand. Under the astute business leadership of Frederick, Elliott Brothers went on to work with a number of leading scientists of the period involved themselves in the production of early electrical instruments, telegraphic equipment and the new aneroid barometer as well as their standard stock. During this time, numerous patents are registered for barometers, telescopes and drawing boards amongst others.

In 1867 the company exhibited at The Paris Exhibition and three years later in 1870, records show that the partnership was dissolved upon Charles’s retirement. Frederick continuing to direct the business until his death in 1877. The business however, was continued as Elliott Brothers under the guidance of William’s wife Susan who took leading telegraph engineer, Willoughby Smith into partnership.

Upon Susan’s death in 1880, the firm finally fell away from family ownership although the Smith family continued to run Elliott’s with Willoughby’s sons, William Oliver and Willoughby Statham taking roles as managers. Under this ownership, the company won a gold medal at the Paris Electrical Exhibition in 1881.

By 1893, Elliott Brothers had merged with Meinrad Theiler & sons but kept the original name and with GKB Elphinstone joining as chairman through this merger, the company gained vital contacts in The Royal Navy. By this time, the company is listed as trading from a new address at 101 & 102 St Martin’s Lane and began to focus business on electrical instruments for the military. Presumably, this more industrial focus led to the company moving out of London in 1898 to Lewisham in Kent but it continued to produce a range of instruments from meteorological to telegraphic whilst also manufacturing naval gunnery tables, it employed 200-300 people by this stage.

In 1902, Elliott Brothers were awarded the Royal Warrant and prior to the Great War, it started to produce aviation equipment for The War Office. Throughout this period, the company profited from its military links and was incorporated as Elliott Brothers (London) Ltd in 1917.

After the World Wars, Elliott’s story is one of specialisation with various subsidiary arms such as Aviation, Automation and Nucleonics being singled off. The company acquired numerous companies throughout the twentieth century before being taken over in 1967 by The English Electric Co and just a year later that company was subsumed under GEC alongside Marconi. However, GEC’s subsidiary arms made reference to both Marconi & Elliott in their names. It was not until 1984 that the Elliott brand was dropped in favour of GEC Avionics, it was renamed again in 1998 as Marconi Electronic Systems and finally absorbed a year later into BAE Systems where the remnants of this prestigious company remain.