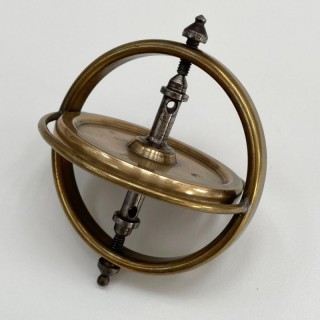 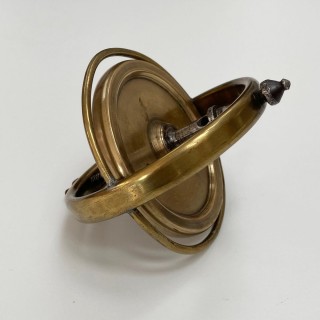 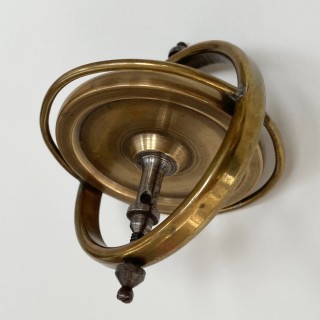 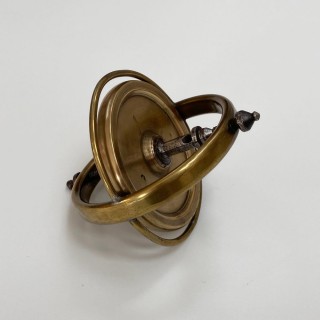 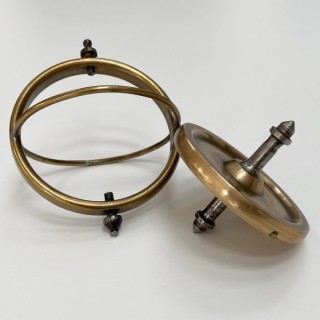 For sale, a Victorian demonstration gyroscope.

This lovely example consists of a brass wheel mounted into a single gimbal with smaller ring of brass running around the circumference of the wheel. A pointed steel shaft at the centre of the brass wheel protrudes either side and is secured within the gimbal by two screws with concave end which when tightened against the pointed disc shafts are engineered to allow the wheel to spin freely.

A hole in each steel shaft allows the insertion of a piece of string which when wrapped around the shaft and then pulled, provides the necessary energy to spin the wheel at a workable speed.

When rotating, the wheel may be moved to the vertical position and will remain balanced in that position as long as there is enough force. When stationary, the gyroscope will of course not maintain this position.

The history of the gyroscope dates back to classical civilisation but in more recent history it was firstly applied as a navigational device for finding true horizon. This 1743 instrument named the “Serson’s speculum” was the precursor to the German scientist Johann Bohnberger’s true discovery of the gyroscope in 1817. The instrument did not however receive its official title until 1852 when the French scientist Jean Bernard Leon Foucault conducted numerous experiments.

Its use remaining seemingly experimental for the latter part of the Nineteenth Century until it found military application in stabilising torpedoes and later in aviation.