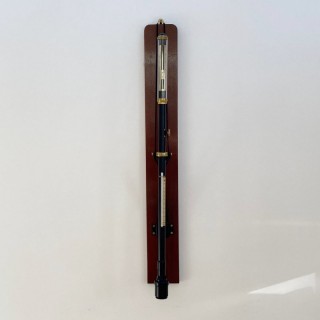 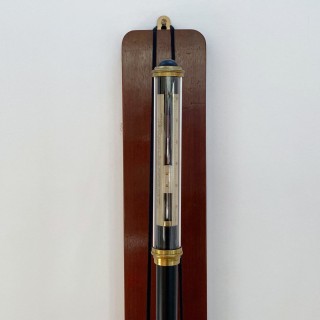 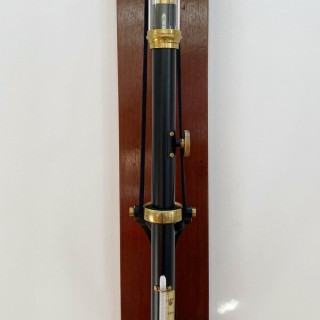 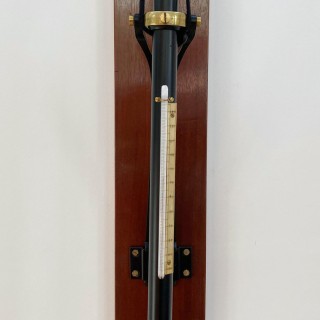 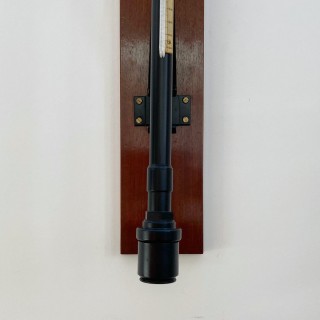 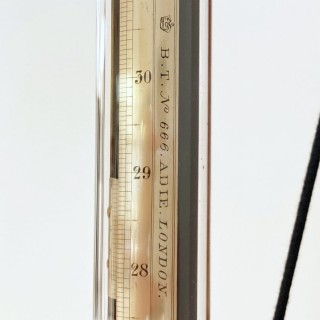 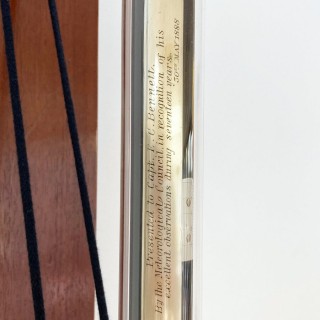 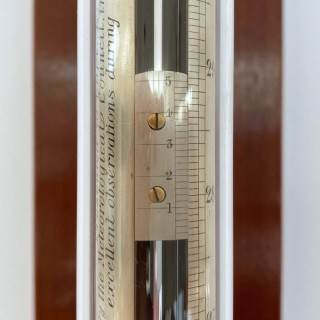 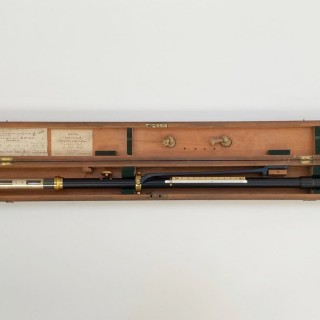 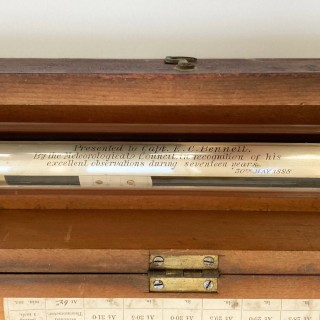 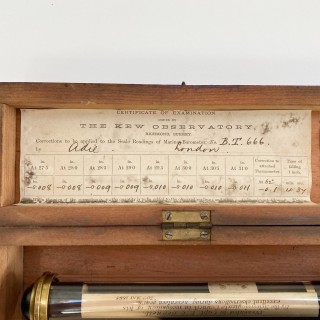 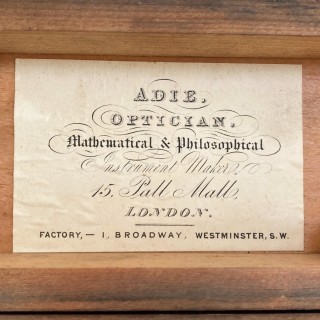 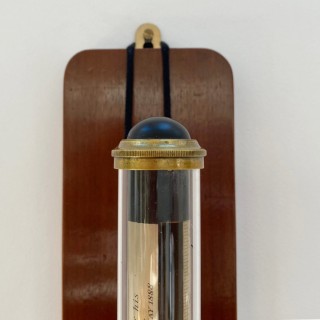 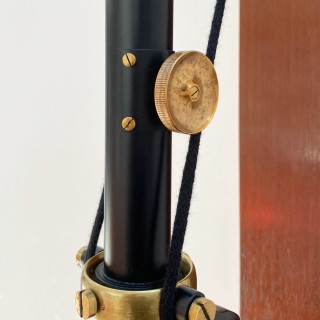 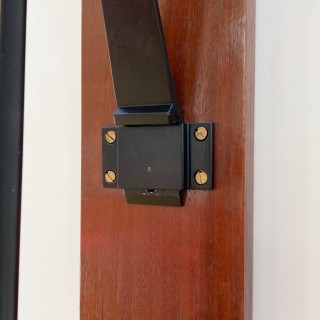 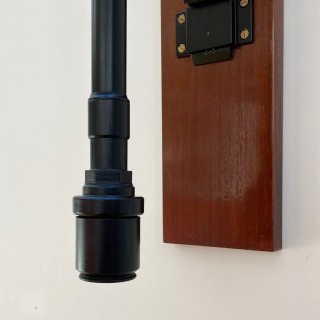 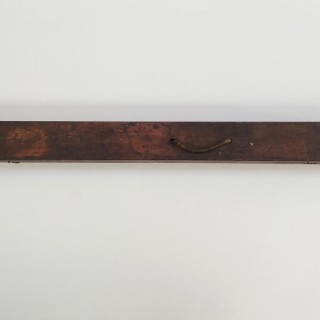 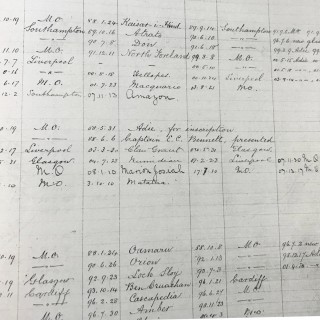 Comprised of a brass and black painted tubular body with an enclosed iron cistern to the base, the lower length carries an engraved Fahrenheit scale thermometer specially designed so that the mercury bulb is protected within the body of the instrument. A bone scale runs to the side of the thermometer with a matching scale to the thermometer measuring 10 to 120 degrees.

The upper section has a brass lipped collar below the scale and a brass screw cap to the top which together support a glass protective tube sitting around the circumference of the silvered scale. The scale has a central reading aperture and Vernier which is operated by a brass dial below and to the right hand side.

The scale measures 26.5 to 32 inches of barometric pressure and is signed above to the maker Adie, London. It has the additional BT and crown engraving to denote its use by the Board of Trade and has the serial No: 666.

The left hand side of the scale bears an engraved presentation inscription:

“Presented to Captain EC Bennett by the Meteorological Council in recognition of his excellent observations during seventeent years. 30th May 1888”

This working barometer comes complete with its original gimbal mount, hinged gimbal arm and clamp for fixing the barometer onboard ship. For domestic display I have also replicated a mahogany backboard using the same dimensions as were originally used for the station barometer version of this instrument. (see my sold listings for an example). The barometer can be displayed in its extended position as it would have been whilst at sea or it may also be tied back against the backboard as would have been done when the ship was stationary in port.

The barometer also retains its original fitted pine packing case with an early type single loop rope handle and the lid still bears its certificate of examination by The Kew Observatory and maker’s trade card, stating:

This new and improved form of scientific barometer was first devised in 1855 by John Welsh of The Kew Observatory in partnership with Patrick Adie of the famous Scottish scientific instrument making dynasty. The catalyst was a conference in Brussels wherein numerous nations met to discuss a way of producing an accurate instrument for weather measurement at sea.

The outcome was a design such as this example and was taken up by The Board of Trade as a standard on both land and sea for many years. Interestingly, Admiral Fitzroy was not a supporter of this barometer due to the use of metal for the trunk construction. He deemed it too prone to breakage from adverse ship movement in stormy conditions or from gun fire. The latter issue was the catalyst for him supporting the invention of the gun marine barometer, a challenge that was taken up by the newly formed but latterly famous Negretti & Zambra.

In regards to this specific barometer, the original Met Office records have been reproduced within the images provided but it states that the Met Office were certainly in receipt of this instrument in October of 1886. It seems not to have been issued to a ship within that time, I suspect because no self respecting and superstitious Sea Captain would have been willing to accept a barometer with the serial number 666! This twist of fate is probably the reason why this example has become a rare survivor of its type. Just two years later in May of 1888, it was sent back to Patrick Adie for inscription and finally presented to Captain EC Bennett in June of 1888.

I can find little recorded on Captain EC Bennett’s service but he would certainly have been one of a number of merchant seamen on whom the Met Office relied for global maritime weather recordings. It was common for the Met Office to reward both long and accurate service and this is one such example. I suspect that the dedication was for a Captain Edwin Charles Bennett who seems to have sailed numerous times from London to Sydney on The Theassalus in the 1860’s, 1870’s and 1880’s. This long journey and the years of service associated within the inscription are a sensible fit but more detailed research would be required to be absolutely certain.

The maker of this historic design, Patrick Adie set up his business in 1844 after serving apprenticeships with both his Father’s famous Edinburgh firm (Adie & Son) and the gas engineers, Milne & Son and specialised in the production of meteorological instruments. Through contacts made during his apprenticeship and training at Sir Thomas MacDougall Brisbane’s observatory near Kelso, Patrick made the close links with John Welsh Superintendent of The Kew Observatory that would eventually lead to the creation of this barometer, a fitting development to his father’s earlier invention of the sypiesometer.

A very scarce meteorological instrument from one of the top scientific instrument making families of the nineteenth century, dateable to the year of Adie’s death in 1886.