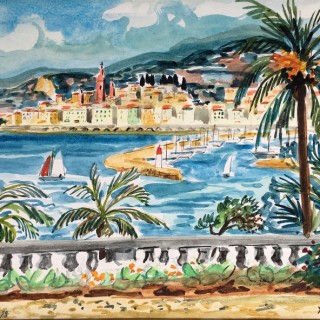 Yves Brayer was born in Versailles, but spent most of his childhood in Bourges. Determined to be an artist from an early age, he set out for Paris in 1924, initially studying at the academies in Montparnasse, and from there he attended the École des Beaux-Arts.

Whilst still a student he exhibited at the Salon d’Automne and the Salon des Indépendants, and in 1927 Brayer left Paris for Spain with the aid of a state grant to enable him to study the works of the Spanish Masters in the Prado. This was followed by a stay in Morocco after being awarded a prize by Maréchal Lyautey, and thereafter a period spent in Italy in the early 1930s.

On his return to Paris in 1934 he exhibited a collection of paintings inspired by his travels in Europe and Morocco at the Galerie Charpentier to great acclaim.

Brayer continued to paint in occupied Paris throughout the Second World War, and also designed the costumes and sets for a ballet performed at the Opera de Paris in 1942.

Having moved south to Cordes in the Tarn region of France after the War, Brayer then discovered the area which was to have the greatest artistic influence on his work: Provence. He was enchanted by the diverse and architectural forms of the Alpilles, and by the vast expanse of the Camargue region with its ubiquitous white horses and black bulls. From then on he spent several months each year working in Provence. He also made various trips to Mexico, Egypt, Iran, Greece, Russia, USA and Japan where he was quick to grasp the unique rhythm and light of each country.

A large collection of Yves Brayer’s paintings are on permanent display both at the Museum of Modern and Contemporary Art in Cordes, in the Salle Yves Brayer and at the Musée Yves Brayer in Les Baux de Provence, as well as various museums in France and elsewhere.

Perfect and presented in Original Frame