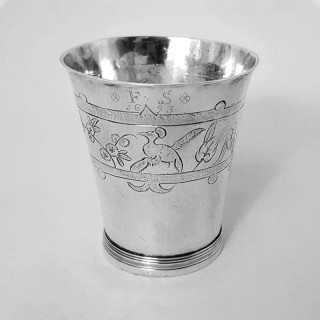 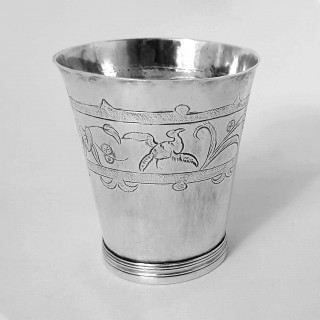 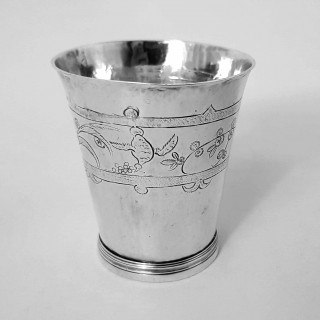 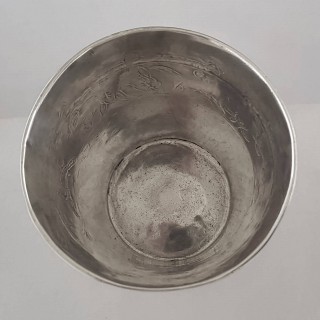 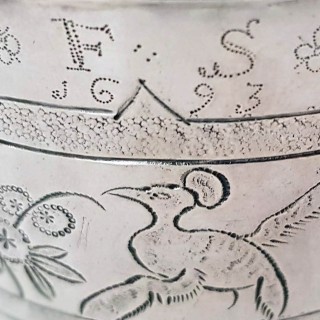 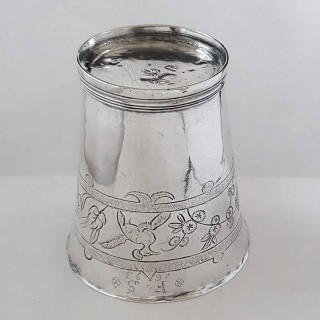 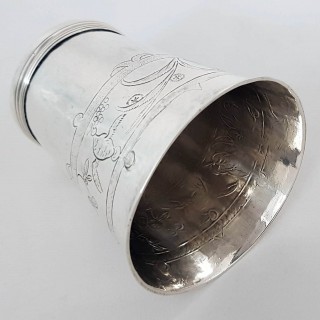 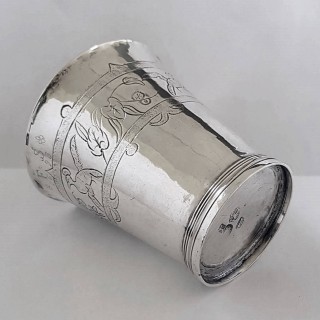 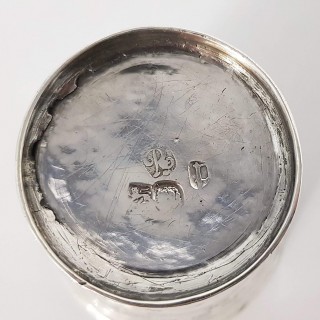 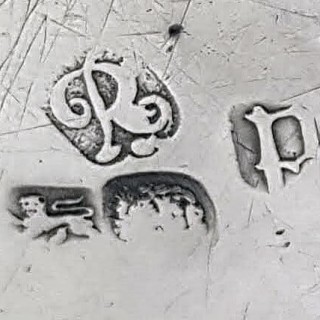 An early English antique silver beaker of plain tapering design with simple foot wires. Dating from the late 1600’s. Compact size. Charmingly decorated with a band of hand chased decoration of birds and foliage in the Chinese style known as “chinoiserie”. To the front there is a hand engraved prick dot design containing “F.S” and the date 1693. Excellent patina and hand beaten finish.

JOHN RICHARDSON
John Richardson, London silversmith, apprenticed to plateworker Henry Greenaway 1661, free 1669. Richardson seems to have continued to work with Greenaway until his retirement in 1670 when Richardson took over the premises and bound his first apprentice Walter Arden. Richardson had both a workshop and an active retail trade and during the 1680’s he was busy making cups and tankards with the exotic flat-chased chinoiserie decoration fashionable at that time. He also produced altar plate for Westminster Abbey supplied by John Thursby. John returned to his home town of Worcester in 1695. Died 1698.
John’s mark of “IR” monogram in script, in the Italian hand, is similar in style to other aspiring silversmiths aiming at the top end of the market, such as Abraham Chair and John Bache. He used the same mark throughout his career.
John’s younger brother Samuel was apprenticed in 1663 to Edward Decayne, a shopkeeping goldsmith specialising in jewellery. Samuel moved back to Worcester in 1674, died 1711.

Flat chased silver “in the Chinese taste” enjoyed a brief period of remarkable popularity from the 1670’s to the early Queen Anne period. Silverware of normal European forms was decorated with enchanting scenes representing Chinamen, birds and Chinese landscapes. The concentration of nearly all surviving examples within this clearly defined period, and the similarity of decoration on objects bearing different makers marks, point to a specialist workshop not yet identified, to which silver was sent by goldsmiths or their customers for decoration. This charming decoration of Chinese figures, birds, foliage etc. is rarely found and adds considerably to the piece.