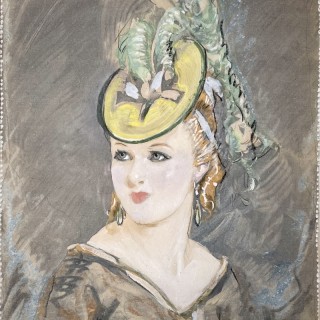 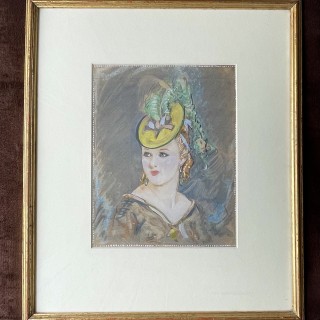 Watercolour and bodycolour over traces of pencil
Framed

William Henry Barribal was born in Oswestry, Shropshire and first worked as an apprentice lithographer in London before studying at the Academie Julien in Paris. By the turn of the century he was established as an accomplished artist and designer, painting portraits and working as a very active commercial artist. During the 1920s and 1930s he created a range of posters for Schweppes and the London and North Eastern Railway and playing card designs for Waddington’s. He also works for many magazines including Vogue, Illustrated London News, The Strand and The Graphic. He exhibited at the Royal Academy and elsewhere. His wife, Gertrude Louise Fannie Pitt, was his principal model. Barribal lived in London and worked from one of the well-known St Paul’s studios on the Cromwell Road.