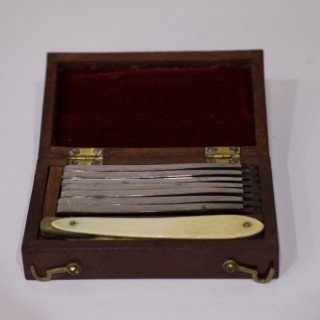 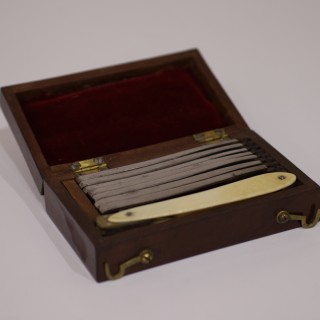 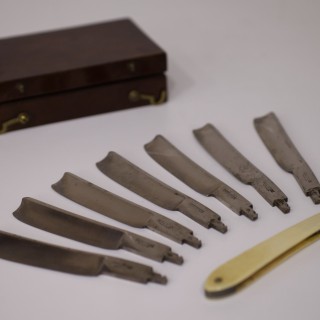 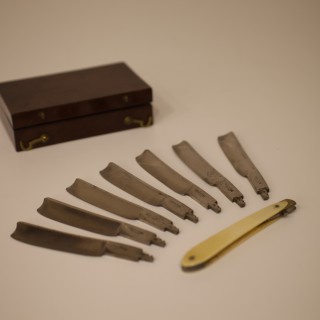 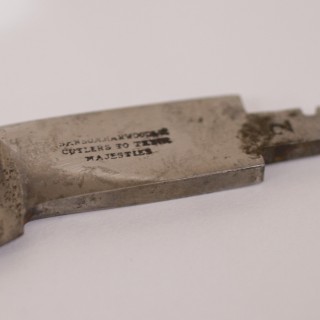 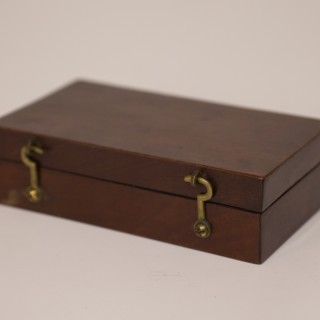 The set of razors is contained within a small hinged mahogany case with hook and eye catches to the front. The fitted case contains seven razor blades all bearing the maker’s name, “Sansom Harwood & Co – Cutlers to Their Majesties” and the number 2 impressed on the tang. At the front of the case a single bone handle is provided with a push button clasp to the end which would allow each individual razor to be inserted and then removed after use. The inside of the lid maintains its original red velvet liner.

Most examples of seven day sets are ordinarily from the Victorian period and all are generally provided with seven razors with individual handles. This particular set can be dated to prior to February 1835 whereupon the short-lived partnership of William Sansom and Samuel Harwood was announced as being dissolved in The London Gazette. Both partners seemingly had the right credentials emanating from the separate Sheffield firms of Thomas Sansom & Sons and William Harwood & Sons but it seems that the venture only lasted for a few short years before its closure. Silver marks for Sansom, Harwood certainly exist for the year 1833. The use of “Their Majesties” provides some strong evidence for the company trading over the course of George IV and William III’s reigns with the use of the title itself suggesting that they were prominent enough to have gained the attention of The Royal Family.

This is an extremely rare set owing to its date of manufacture, its style of manufacture and relating to a Sheffield plate company that wasn’t long in existence. I can find no other examples of a razor set by this company.